Regidrago is a pink orb Pokémon with jaw-like cracks surrounding its eyes, which are blue and stylised into somewhat of a Y shape. Its arms are halves of a skull's jaw resembling Charizard's. It has two stubby legs with black cracked feet.

Regidrago's body is composed of crystallized dragon energy, and the energy is densest in its central core. It can use Dragon-type moves with greater power than other Pokémon thanks to its body composition.

Folklore tells that Regigigas tried to create a Pokémon from crystallized dragon energy, but eventually ran out of crystals. As a result, only the head was able to be completed. Fearing that if Regidrago were to be completed, it would rain destruction on their land, ancient people sealed it away within a temple in the Crown Tundra.

Regidrago is based on a golem, an artificial creature from Hebrew legend that was given life through the writing on its head. As the Regi quintet seem to be based on ages of history, Regidrago may represent the Middle Ages, which lasted from 475 CE to 1543 CE, or alternatively the Mesozoic Era, known as the Age of Reptiles as it was when the dinosaurs lived, which lasted from about 251.902–66 million years ago. Its round crystalline form may be based upon motifs of East Asian dragons bearing crystalline pearls in their claws, which were believed to represent their closeness to universal perfection as the creators of the universe from this stemmed the belief that crystals are the remnants of a dragon's divine breath, while their incomplete nature may draw from Japanese art motifs of depicting dragons coming into frame and without whole figure to represent their unfathomable power. Its appearance and category may also be a reference to the Dragon Ball anime and manga series.

Both Regidrago and Rejidorago are portmanteaus of "regis" (Latin for "royal") and "dragon". 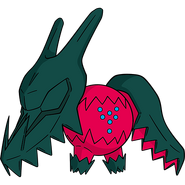 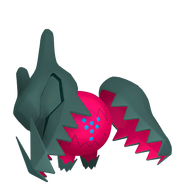