For the variant appearing in the games, see Red.

A Glimpse of the Glow

Red is a character appearing in Pokémon Adventures, who the main protagonist in the "Red, Green & Blue Chapter" and the "FireRed & LeafGreen Chapter".

This section, or a part of it, has been transcluded from Red; any changes involving it should be made there instead. /

He also wears a red shirt over a white t-shirt along with blue jeans and white-red sneakers as well as a red and white cap with the symbol of a leaf on the left side of it. He also carried a brown backpack with a light black strap.

Red's appearance remains the same as it is in Red, Green & Blue, with exception of a new red band, which he tied around his left thigh on top of his jeans. It's assumed that received the band after becoming Champion.

Red's T-shirt changes from black to white, and he no longer wore his cap backwards.

Red's special skill is Pokémon battling, earning the title of the "Fighter".

As a child, Red's first Pokémon was a Poliwag, who he nicknamed "Poli" (ニョロ Nyoro). One day he fell into a lake and couldn't resurface. Poli then evolved into Poliwhirl to save him from drowning.

Red debuts in Pallet Town while he teaches a group of how to catch Pokémon. Before they leave, they tell him about the famous Professor Oak and his grandson, who had just returned from training overseas. They say that Professor Oak is famous for his knowledge of Pokémon. Feeling arrogant, Red went to prove that he is better than him. Later, he ran into some men in black uniforms with a red colored 'R' on their chests and overheard them talking about the "Phantom Pokémon." Red then decided to try to catch it first and headed to western Pallet with as many unused Poké Balls as he could carry. He then saw a trainer with a Charmander battling it out with an unknown Pokémon. Red observed the intense battle, until the trainer appeared to have indiscriminately called back his Pokémon.

Red revealed himself to the trainer and the Pokémon. He asked the trainer why he called back his Pokémon, but he was not given an answer. He then called out Poli to battle the Phantom Pokémon only to lose horribly. The Phantom Pokémon then fled. As Red was nursing Poli (as well as coping with losing for the first time), the other trainer then told Red that he recalled his Pokémon because he acknowledged the sheer difference in power. The men in black appeared after the trainer and the Phantom Pokémon left. Though one tried to interrogate Red, another told him it would be useless and the group left. After losing terribly, he went to find Professor Oak for help.

Red began ringing the doorbell on Professor Oak's lab but received no answer. He then realized that the door was open and he entered. He looked around at all the Poké Balls not realizing that there were so many Pokémon. He then came across one Pokémon that caught his eye - a Bulbasaur. He introduced it to Poli, only to get surprised by an old man who had just entered the door. The man called him a thief and as the startled Red tried to explain himself, he accidentally released all of the Pokémon in the lab.

Though Red was able to re-capture most of the Pokémon, some of them escaped. Red then introduced himself to the man and the man introduced himself as Professor Oak. Red tried to re-explain that he didn't come to his lab to steal Pokémon though Oak still wasn't convinced. They chased down most of the Pokémon as they made their way to Viridian City. They then went after Bulbasaur, the last escaped Pokémon, who went into the abandoned gym. When, Red and Oak entered, they saw Bulbasaur.

As Oak tried to comfort it and recall it, Bulbasaur tackled him. Red then reached out his hand in a successful attempt at calming Bulbasaur down. He, Bulbasaur, and Oak were then blind-sided by a wild Machoke. Oak began to lose consciousness as Bulbasaur began to defend Red but to no avail. Red then saw sunlight peeked through the blinds of the room's windows. He opened the blinds to allow Bulbasaur to use Solar Beam and knockout Machoke.

When Oak regained consciousness, he asked how Red knew about Solar Beam and Red replied that he just thought that a plant (the bulb) would need sunlight. Red then explained that he did not go to his lab to steal Pokémon but to ask advice. Red explained what had happened in the Western Woods of Pallet Town and Oak told him that he needed to find his own strength. Oak then gave Red a Pokédex and the captured Bulbasaur (now nicknamed Saur) and parted ways.

Oak suggested that Red head to the Viridian Forest to catch Pokémon. He also mentioned that "someone else" should be there by now.

Red headed to the Viridian Forest. Upon reaching his destination, he remembers that he did not stock up on Poké Balls, but continued on anyway. Later on, he and Poli began chasing after a Caterpie, only to lose sight of it. Poli went around a bush to go look for it. Red followed him, only to see that Poli had been defeated by a trainer with a Charmander, who believed that Poli was wild. Red lunged at the trainer in anger only to be effortlessly parried. The trainer then explained that it would only a matter of time until two trainers capturing Pokémon would come across each other.

Red then recognized the trainer as the same one from Pallet Town. Suddenly, giant footsteps could be heard. The trainer then revealed that he had been waiting for this. Then, a Kangaskhan appeared. The trainer commanded his Charmander to attack. He explained that he could catch it and record its data in an object in his hand. Red immediately noticed that it was a Pokédex. Red showed his to the trainer and all he could do was laugh. Red asked what was so funny and he replied that his grandfather said that he gave a Pokédex to another trainer and questioned why.

When Kangaskhan was weak enough, the trainer tried to catch but to no avail. As Charmander continued to attack, Red noticed that something was wrong. When he realized what it was, he demanded that the trainer stop attacking only to be brushed off. Red then commanded Poli to dowse Charmander. The trainer demanded to know why he did that. Red ran up to the Kangaskhan and asked if her child was okay. The baby then poked her head out of the mother's pouch. It looked very sickly.

Red gave it a potion and when the baby was healed, the mother left. The trainer then complained that he could have captured it. Red responded by saying that it would not fair to battle someone at a disadvantage. The trainer began to walk away. Red introduced himself and asked for the trainer's name. The trainer answered "Blue" (Green in Japanese) only to shut him up. Red then shouts that he won't lose to him and then left.

It was shown that he went missing for a while and Yellow searched for him by the instructions of Green because she too is worried. It was revealed he was frozen but was freed later. He then helped Lt.Surge and Bill fight against Bruno. Yellow also battled Lance, the elite fours leader, and managed to pull out a win.

Red starts out in the chapter preparing for the Viridian Gym Leader selection test. He is having trouble with his wrists and ankles due to being frozen by Lorelei in the previous chapter. He passes the selection test, but declines it due to his condition and plans to go to the Mt. Silver hot springs to heal his injuries. Red helped out Gold with the others in their problem in Johto, at the last chapter they are shown to be riding their bicycle going up to Mt. Silver. This is also the chapter were Red finally knew that Yellow was a girl (because she had to remove her hat), which surprised Red and also Gold.

Giovanni is rising again and Red and the others are trying to stop him but they also faced Deoxys who contained some of Red's DNA from his battle with Giovanni. Later they were turned to stone by Sird, to which shocked most citizens and also Professor Oak.

Apparently, Professor Oak sent Emerald to catch Jirachi so that he can wish to free Red and the others who were turned to stone and because of it and with the help of Emerald, Gold, Crystal, Ruby and Sapphire, they were able to free Red and the others from their stone state. Later, they are surprised when Red said that why won't they hold a match and each and every Pokédex Holders will join, it is known that Emerald won it.

Ruby, Sapphire and Emerald are joined by Red and Green to destroy a giant meteor coming towards Earth. 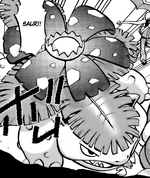 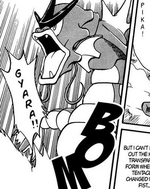 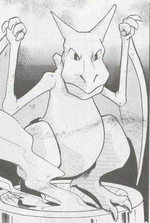 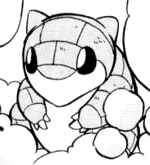 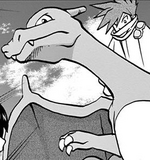 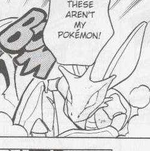 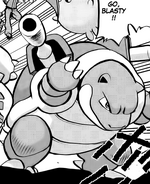 A young Red and Poli as a Poliwag

Red and his Pokémon

Red in disguise as a Team Rocket Grunt

Red, Blue, Green, Silver and Yellow being freed from their stone state (colored) 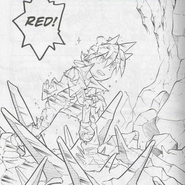 Red being an ice statue