Red, Green & Blue Chapter is the first Chapter of Pokémon Adventures manga. It is based on the games, Red and Green, as well as Blue. It is consisted of three volumes.

In the first volume, a young trainer, Red, starts his journey to become the greatest Pokémon trainer. He meets Blue, his rival, who is Professor Oak's grandchild and clashes with him. To prove he is stronger, Red goes to challenge the Gym Leaders, starting from Brock of Pewter City. However, a mysterious organization called Team Rocket is doing some suspicious and nasty things to control the Kanto region. To battle them, Red teams up with Misty, whose Gyarados was a victim of their experiments. Passing by Mt. Moon, where they fought a an elite Team Rocket member, the two arrive to Cerulean City, where Red trains with Misty, who is also a Gym Leader. After helping a Rattata, who is actually a human, Red has another face-off with Team Rocket at Vermilion City, against Lt. Surge, during which his Poliwhirl evolves into a Poliwrath. He eventually arrives to Lavender Town, where he and Blue fight a Team Rocket member he fought on Mt. Moon, Koga.

The volume contains 14 chapters, from "A Glimpse of the Glow" to "That Awful Arbok!" Red goes from Pallet Town to Lavender Town. 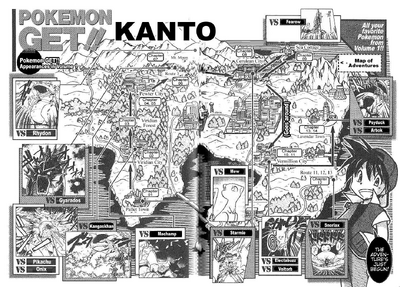 Red continues to track down Team Rocket and meets a fellow trainer, Green, who steals two of his badges. He goes to take revenge on her until he learns from her about Team Rocket's greatest target: Mew. After having a battle with Erika, saving an Eevee and having an adventure at the Safari Zone, Red returns to Pewter City with a kind man. The man helps Red, only to see his skills he used to defeat his lieutenants. Red took a turn around the Whirl Islands, where Misty visited him to lend hi9m her Gyarados. Eventually, he helped Blaine fight Moltres and rescue Articuno from Team Rocket's clutches. Red returns home, only to find out Pallet Town empty. In fact, Sabrina, one of the Team Rocket trio, had her Kadabra, disguised herself as Professor Oak, attack Red, before vanishing. Blue returns, too, and reports the villagers have been captured to Saffron City, where Team Rocket's headquarters lie. 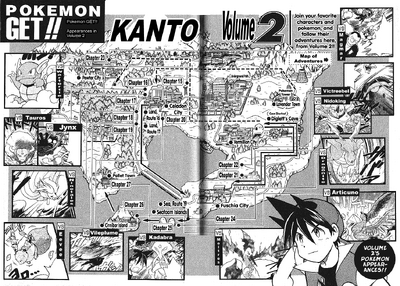 Red joins up with Green and Blue to storm the Silph Co. headquarters. Unfortunately, they split up and fight the Team Rocket trio - Lt. Surge, Sabrina and Koga - who control the Legendary Birds. Red defeats Lt. Surge and helps his friends in defeating the rest. By accident, Green activates a machine, fusing Zapdos, Moltres and Articuno, but thanks to Venusaur, Blastoise and Charizard, the beast is defeated and the Legendary Birds scatter. Red, however, goes with Blaine to defeat Mewtwo, a creature created by Blaine himself, which becomes captured in a Master Ball. Red goes to challenge the last Gym Leader, Giovanni, who is Team Rocket's leader. Red has a fierce battle to save Kanto from Giovanni's clutches, and uses the insulated gloves he obtained from Lt. Surge to stop Giovanni. After these encounters, Red fights his way to the Pokémon League. Green fights Professor Oak, who decides to give her a Pokédex and forgive her for the theft of his Starter Pokémon, Squirtle. Professor Oak lets Red and Blue battle, who show the experiences they obtained and learned from each other in the previous encounters. Red shows his friendship towards his Pokémon and wins the title of Champion.

The volume contains thirteen chapters, from "Peace of Mime" to "A Charizard... and a Champion". Red goes from Pallet Town to Indigo Plateau. This is also the final volume of Red, Green & Blue Chapter and the story continues in Yellow Chapter. 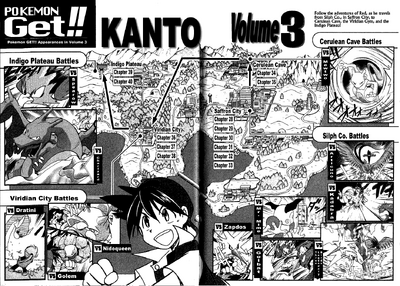