Red in other languages

Red is the canon name of the protagonist of the Generation I games and is a Pokémon Trainer from Pallet Town, Kanto. He is the first character to be playable in the Pokémon series and his initial appearance is set in the Generation I main games. He has since then made various appearances in Pokémon media, including the Generation III remakes of Red, Green and Blue; FireRed and LeafGreen. Red became the official Kanto Pokémon League Champion. Red is also a non-playable character in Gold, Silver, Crystal, HeartGold, SoulSilver, Black 2 and White 2, Sun, and Moon,Let's Go, Pikachu! and Let's Go, Eevee!.

He can be fought at Mt Silver (Gold, Silver, Crystal, HeartGold, SoulSilver) and in the Pokémon Champion Tournament at Black 2 and White 2.

Red in the first generation had a black hair, red eyes and his outfit is very similar with the current one, with the difference that his cap, in front part is white and his used gloves who are covered part of his hand with the red color.

His appearance is very similar to that in Pokémon Yellow.

FireRed and LeafGreen and HeartGold and SoulSilver

Red appears in Sun and Moon with a new outfit, which consists of a white T-shirt with red short sleeves and a logo, blue jeans, red and white sneakers and a slightly redesigned cap. He also carries a new yellow backpack. He also appears older compared to the previous titles.

Red's outfit is very similar to the original games, but now look a bit more updated. One of the few design changes includes updating his vest to be a shorter length.

Red is a very serious person, especially when he battles. This can be seen easily because he seldom smiles. He is very quiet, usually only ever using ellipses (...) in the games. He is shown to be both loyal to his Pokémon and his cause, and seen by the fact that he always has the three potential starters on him, indicating whichever Pokémon he chose first has remained with him, and when he fought in the World of Light Trailer (Super Smash Brothers Ultimate) where he and his Pokémon were among the few to fight back against Galeem.

In Red, Green and Blue, Red is a young boy from Pallet Town. The local Pokémon expert, Professor Oak, stops him from leaving town one day, saying that he needs a Pokémon for his protection. Upon doing this, Oak takes him to his lab and allows Red to choose one of three starter Pokémon, along with his grandson and his rival Blue.

After spending some time with his Pokémon, and returning to Pallet Town, Professor Oak gives both him and Blue a Pokédex so that they can fill it with information on Pokémon. This is the start of Red's Pokémon journey throughout the Kanto region.

In Yellow, his story is very similar, except that now Red receives a Pikachu as his starter.

Gold and Silver and Crystal

In Gold and Silver and Crystal, Red is fought at Mt. Silver, in which he has Pokémon similar to Ash of the anime (except for the fact that all three starters are fully evolved compared to Ash only having one fully evolved). Red also retakes this role in Pokémon HeartGold and SoulSilver. Player can battle once again by defeating the Elite Four.

In HeartGold and SoulSilver, Red will reappear to battle every time the player defeats the Elite Four.

In FireRed and LeafGreen, he reappears as the protagonist (although this is a remake). In this saga, he has a female counterpart named Leaf.

Like in Pokémon's 'Gold' 'Silver' and 'Crystal' The Player can battle red on top of Mt. Silver with the same set of Pokémon from the original titles.

In Black 2 and White 2, he participated in the Pokémon World Tournament. Meaning he has appeared in at least one game in all generations, except for the sixth and eighth generations in which he didn't reappear (We will have to wait and see if Brilliant Diamond and Shining Pearl / Legends: Arceus gives us a surprise) .

Red can be battled at the top of the Indigo Plateau, near the entrance after defeating at least 6 Master Trainers.

Similarly to HeartGold and SoulSilver, Red will rematch the player when he/she beats the Elite Four.

Red makes an appearance in Super Smash Bros. Brawl as the Pokémon Trainer, he is accompanied by Squirtle, Ivysaur, and Charizard and is a newcomer. He only talks when switching Pokémon and when he wins. He does not fight but instead is shown in the background commanding his Pokémon (using special-down will switch them during battle). In story mode he follows the character if he is being used until they get to a point where he is unable to continue, however he will be warped in front of the character at certain times. Each Pokémon he uses is different in weight and evolution. Squirtle is a light weight and is not evolved at all, Ivysaur is an averaged out middle weight and a has evolved once. Charizard is a heavy weight and is fully evolved.

Role in the Subspace Emissary

Red is first introduced when Lucas bumps into him and both are surrounded by Primids. Red uses Squirtle (the only Pokémon available at the start of Red's appearance) to defeat them and continues to go search for more Pokémon (in which Lucas goes with him). They then go to the ruins to find Charizard and Ivysaur, but before they continue, they then are attacked by Wario, which they win. During the story, Red finds Ivysaur as a trophy (likely due to a lost battle with Charizard) and captures it with a Poke Ball, and battles Charizard and captures it as well. He and Lucas then reach the end if the ruins and battle Galeom who fell though the top. After winning, Galeom is revealed to be a Subspace Bomb and grabs Lucas and Red (the latter being knocked out). However Lucas frees them and they are saved by Meta Knight. They then go with Marth, Meta Knight and Ike. They then go to a mountain where a battle is taking place, which ends with an army from Subspace coming to attack. They manage to defeat them (with help from Mario, Link, Kirby, Pit, Yoshi and Ice Climbers). They then meet up with the heroes that were in the Halberd and the Bomb Factory. He (along with the others) go to subspace to defeat Master Hand. However he is defeated with the others by Tabuu. If he is found by King Dedede, Luigi and Ness he will go to fight Tabuu.

Super Smash Bros. for Wii U and 3DS

Although Squirtle and Ivysaur are cut from the game, leaving only his Charizard to be solely playable, Red is demoted to assist trophy instead.

Red and his three main starter Pokémon finally returns to be playable once again, with his female counterpart, Green, as a color swap.

Red with Blue in the Pokémon Masters trailer (anime)

Red uses three of these Pokémon in Single Battles, four in Double and Rotation Battles, and all six in Triple Battles. 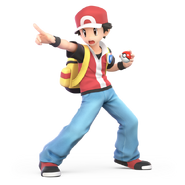 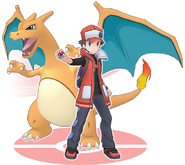