Rebecca Honig, also known as Rebecca Handler, is an American voice actress for 4Kids Entertainment who provided voices for seasons 7 and 8. She is best known outside of Pokémon as the voice of Cream the Rabbit in Sonic X and in the games from 2005 to 2010. 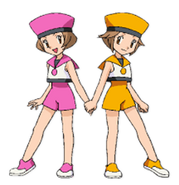 Xander
Add a photo to this gallery
Retrieved from "https://pokemon.fandom.com/wiki/Rebecca_Honig?oldid=1218265"
Community content is available under CC-BY-SA unless otherwise noted.