Rayquaza (Japanese: レックウザ Rekkuuza) is a Dragon/Flying-type Legendary Pokémon introduced in Generation III. It is the version mascot for Pokémon Emerald.

It is a member of the Weather Trio, alongside Kyogre and Groudon.

Rayquaza is a long green serpentine Pokémon with yellow eyes. It has pink lining on the mouth. It has yellow, linked, circular markings on its entire body. In Mega form, it has a Delta-shaped jaw on its mouth and an elongated serpent body. As Mega Rayquaza, it is more aggressive and powerful.

As a natural ability, Rayquaza can float and control the speed, direction and altitude of it's levitation. Despite not having used any of these characteristics in battle throughout its appearances in the anime, all the Rayquazas have very sharp claws on the hands, very sharp teeth and a very powerful constrictor body. It's not known if Mega Rayquaza can use its energy whips/tentacles as weapons or regular body members. Naturally, given it can travel through the ozone layer safely and even higher layers of Earth's atmosphere, it demands very little air to live and possibly none. If none, it could possibly travel through space, since the layer that intermediates the Ozone layer and the troposphere can hit -60 °C or -76 F. If the belief that Rayquaza is responsible for destroying meteors still in the higher atmospheric layers is true, it would have to be able to endure temperatures that can reach -100 °C, or even -148 F. It shows that Rayquaza have an great resistance to cold, which is ironic since it has double weakness to the Ice-typing. Despite its resistance, it is not known if Rayquaza can endure the -270 °C or -454 F of an absolute space vacuum.

Due to its nature of absorbing the ozone layer particles, if Rayquaza is at Alola region, it is a direct predator of Minior, should the latter Pokémon died in its core form at limited time and had its particles become one with the universe for Rayquaza to feed.

Rayquaza seems to be a very aggressive and territorial Pokémon, shown when it attacked a Deoxys. Yet, its aggression toward Deoxys could derive from the belief that Rayquaza is commissioned with the natural duty of shielding Earth from meteorites and similar threats, as was hinted in the Delta Episode bonus in the Pokémon Omega Ruby and Alpha Sapphire Pokémon games.

In the Hoenn region's mythology, it was said that Rayquaza stopped the fight between Groudon and Kyogre. It lives in the ozone layer far above the clouds and cannot be seen from the ground. It is noted for protecting its territory fiercely. An example of this was when a Deoxys, which had fallen from space in a meteor, appeared, Rayquaza thought that Deoxys was invading its territory and so, attacked it.

Rayquaza does not evolve normally. Rayquaza can Mega Evolve however, after learning the move, Dragon Ascent.

Rayquaza is a Generation III Pokémon, first appearing in the Pokémon Ruby and Sapphire games. In 2005, Rayquaza became the version mascot for the Pokémon Emerald game. In all three games, Rayquaza can only be obtained at the Sky Pillar. It can be caught after the eighth Gym (but only for Pokémon Emerald), making for an easy victory over the Elite Four.

In Red Rescue Team and Blue Rescue Team, Rayquaza plays a key role in the story. Xatu warns all of the Pokémon in Pokémon Square that a large star is falling and is going to destroy the planet, and says that the only way to get rid of it is to ask Rayquaza to destroy it. The main character must use Xatu's teleporting stone to reach the Sky Tower, where Rayquaza dwells. When the main character meets Rayquaza, it is extremely enraged to see that Pokémon from the ground have come "where they are not supposed to be". When the player beats Rayquaza, it will realize its mistake. The star that will destroy the planet is coming near, so Rayquaza blasts it with its Hyper Beam. The blast is so overwhelming that the main character and his partner fall off the top of Sky Tower.

It can also be found in HeartGold and SoulSilver in Embedded Tower after the player obtains Kyogre (HeartGold) or Groudon (SoulSilver).

Rayquaza is the second main boss the player must fight in Super Smash Bros. Brawl's Adventure Mode, The Subspace Emissary. Diddy Kong runs to find help for Donkey Kong, and comes across a large lake. He notices a destroyed Arwing nearby, and goes to investigate. Rayquaza appears out of the lake, angry that Diddy trespassed into its territory. It grabs Diddy, but Fox emerges from the Arwing and uses Fox Illusion to free Diddy Kong from Rayquaza's grasp. The two quickly team up and defeat Rayquaza. Rayquaza's appearance is also notable because it is the only boss in The Subspace Emissary who is fought by a group that does not include any other characters from its own series.

It is interesting to note that Rayquaza was found within the lake as opposed to its usual dwelling, the sky.

Rayquaza appears later in the Great Maze, as one of the eight bosses the player must face before completing the adventure.

Rayquaza also appears in Brawl's stadium, in a mode called Boss Battles. Rayquaza is one of the ten bosses that the player must fight.

Rayquaza makes its debut in the 7th movie MS007: Pokémon - Destiny Deoxys. Like all other Legendary Pokémon, Rayquaza is a truly powerful Pokémon. Four years before the main movie, Rayquaza had fought against Deoxys because it thought the Pokémon was invading its territory when the meteorite Deoxys used for travel landed on the earth.

When Iris was leaving Blackthorn City with Axew and her newly captured Gible, she spotted Rayquaza flying through the clouds in the sky. A Shiny Rayquaza also appears in MS018: Pokémon The Movie - Hoopa and the Clash of Ages as an ally of Hoopa and Ash against Hoopa Unbound, while another appears in the Mega Evolution Specials.

Rayquaza is based on an East Asian dragon with elements of the Ziz from Abrahamic religion (as both are described as being masters of the sky) and the Aztec wind god Quetzalcoatl, who was often portrayed as a feathered serpent.

Rayquaza and Rekkūza come from "ray" (referring to the cosmic radiation it would likely be exposed to in its ozone layer habitat), "quasar" (the most distant celestial objects observed thus far, often theorized to be galaxies emitting high levels of radiation), and possibly "raqiya" (a Hebrew word that literally means "expanse," but has been used to mean "sky"). They may also be derived from 烈 (retsu, Japanese for "furious"), 空 (kū, "sky," "air," or "vacuum" in Japanese), and 座 (za, Japanese for "seat," but also used as a suffix for constellations), thus meaning "one who sits in the furious sky." 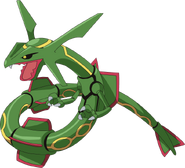 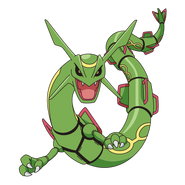 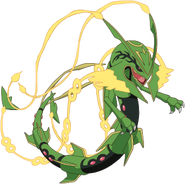 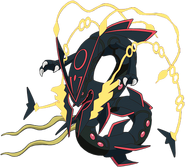 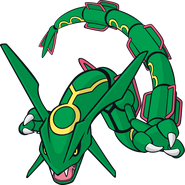 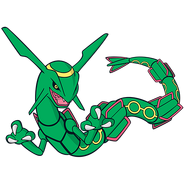 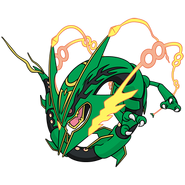 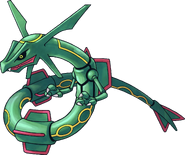 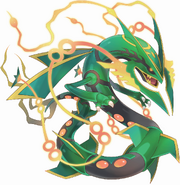 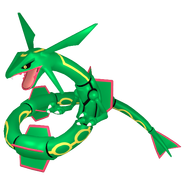 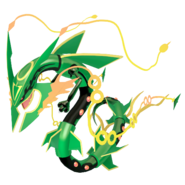 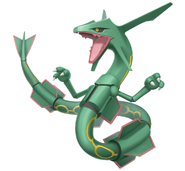 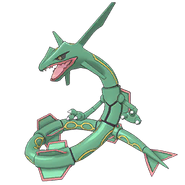 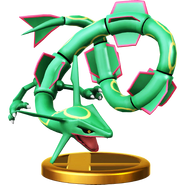 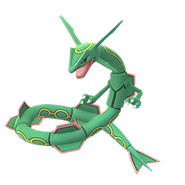 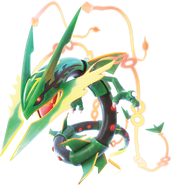 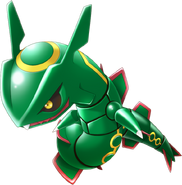 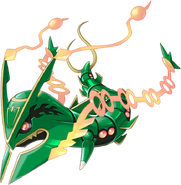 Brendan and May encountering Rayquaza from Ruby and Sapphire. 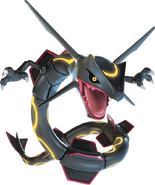