Rapidash (Japanese: ギャロップ Gyaroppu) is a Fire-type Pokémon introduced in Generation I.

Rapidash is a cream-colored equine Pokémon with red eyes and a long horn atop its head, similar to a unicorn. Its mane and tail are comprised of red and yellow flames, while smaller embers trail from its fetlocks.

Rapidash can have the ability Run Away or the ability Flash Fire. Run Away allows Rapidash to run from all wild Pokémon. Flash Fire allows it to be immune to Fire-type attacks. If it is hit by one, its Attack increases. Rapidash is also one of the fastest Pokémon with a top speed of 150mph. Rapidash is rather competitive and tends to have a rash nature. They are quite rare in the wild and can be found mostly in Kanto, although sightings in Sinnoh, Johto and Unova have occasionally been reported.

Rapidash is the evolved form of Ponyta at level 40. 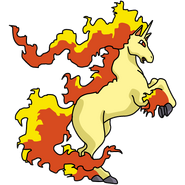 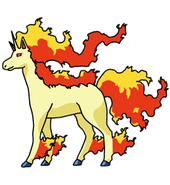 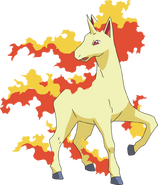 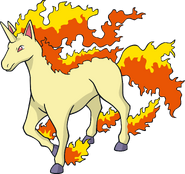