For the variant appearing in the games, see "Ramos".

Ramos in other languages

Ramos is a character appearing in Pokémon the Series: XY and XYZ, who is the Gym Leader of Coumarine City in the Kalos region.

This section, or a part of it, has been transcluded from "Ramos"; any changes involving it should be made there instead. /

An old, cheery man, Ramos firmly believes that, sometimes, one has to take different actions rather than charge right ahead. He also wanted to teach this to the heroes, showing that Ash shouldn't be always reckless, but to see the situation and the possibilities first.

The name Ramos comes from ramus (Latin for "branch") and "moss".

Ramos saw the heroes coming to his ranch (when Clemont's device broke and went across the fence) and warned them they were trespassing. The heroes apologized, since they were on the way to the Pokémon Center, while Clemont noticed Ramos used his Pokémon to store solar power and convert it into electricity. Moments after, it started to hail so Ramos, riding his Gogoat, warned people to stay inside their houses until the threat is cleared. Ramos came in time to pull Ash away from being frozen by Vanillish and Vanilluxe, then had Jumpluff use Sunny Day and Sunflora Solar Beam to clear the Hail, calming the ice Pokémon down. Team Rocket, who took the ice Pokémon, attacked the heroes, so Ramos had Gogoat use Grass Knot to bind their machine, allowing the heroes to blast Team Rocket off. Ramos warned Ash sometimes one has to see other options, rather than charge in the field. Nurse Joy thanked Ramos for the help, so Clemont realized Ramos was the Gym Leader of Coumarine City.[1]

The next day, the heroes came to Ramos' Gym, inside the Pledging Tree close to Coumarine City. Ash wanted a match, but Ramos had them drink tea and tend his garden. Ash tried to end this quickly, but Ramos stopped Ash, showing he shouldn't be reckless, for Ash, in his attempt to cut the weed, nearly cut a blooming flower. Ash understood and asked Ramos for the Gym match, who accepted. In the three-on-three match, Ramos sent Jumpluff, who dodged Fletchinder's Flame Charge, using Sunny Day. However, despite its Cotton Guard, Jumpluff was soon defeated. Ramos sent Weepinbell, who spouted Poison Powder, and evading Fletchinder's moves. Fletchinder was defeated by its Slam attack, so Ash sent Hawlucha, who also was poisoned. Hawlucha managed to hit Weepinbell with High Jump Kick before also being defeated by Slam. Ash sent Frogadier, who managed to protect itself from Poison Powder and defeat Weepinbell with Aerial Ace. Ramos then sent Gogoat, who managed to counter Frogadier's illusions and trap it in a tornado made by Razor Leaf. Ash, reminding himself about Ramos' lesson, had Frogadier sense Gogoat's location and use Aerial Ace on it. Gogoat used Vine Whip to banish Frogadier's illusions, but was defeated by Water Pulse. Ramos was pleased, since Ash managed to learn well his lesson and gave the Plant Badge away.[2]

The following day, Ramos found the heroes and told them the Coumarine City's festival close to his Gym would be commenced. He told them the story behind it - a man had come to Coumarine City with his Skiddo and, praising his friendship with Skiddo, had given a plant as present to it, a plant which grew into the Pledging Tree. After decorating the tree with the lights, Ramos saw many people coming to the Pledging Tree. Despite Team Rocket's interference, the festival was conducted and Ramos activated the lights, amazing everyone present, who also gave their Pokémon the presents they found.[3]

Ash remembered all the Gym Leaders he fought to earn his badges on his journey when he fought against Everett and his Furfrou.[4]

Ramos was seen watching Lysandre's broadcast from Lumiose City where he revealed that he was the leader of Team Flare.[5]

Ash remembered Ramos and his Gogoat fighting the Giant Rock with the rest when he was reflecting back on his journey.[8] 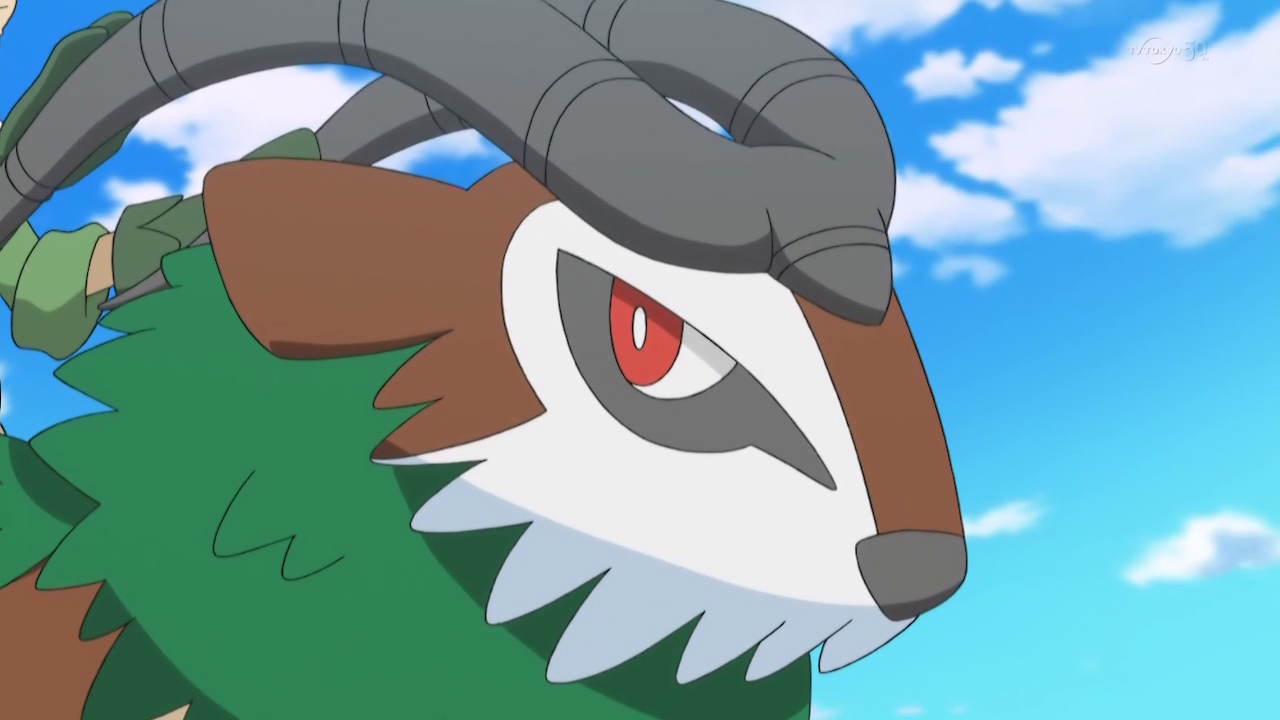 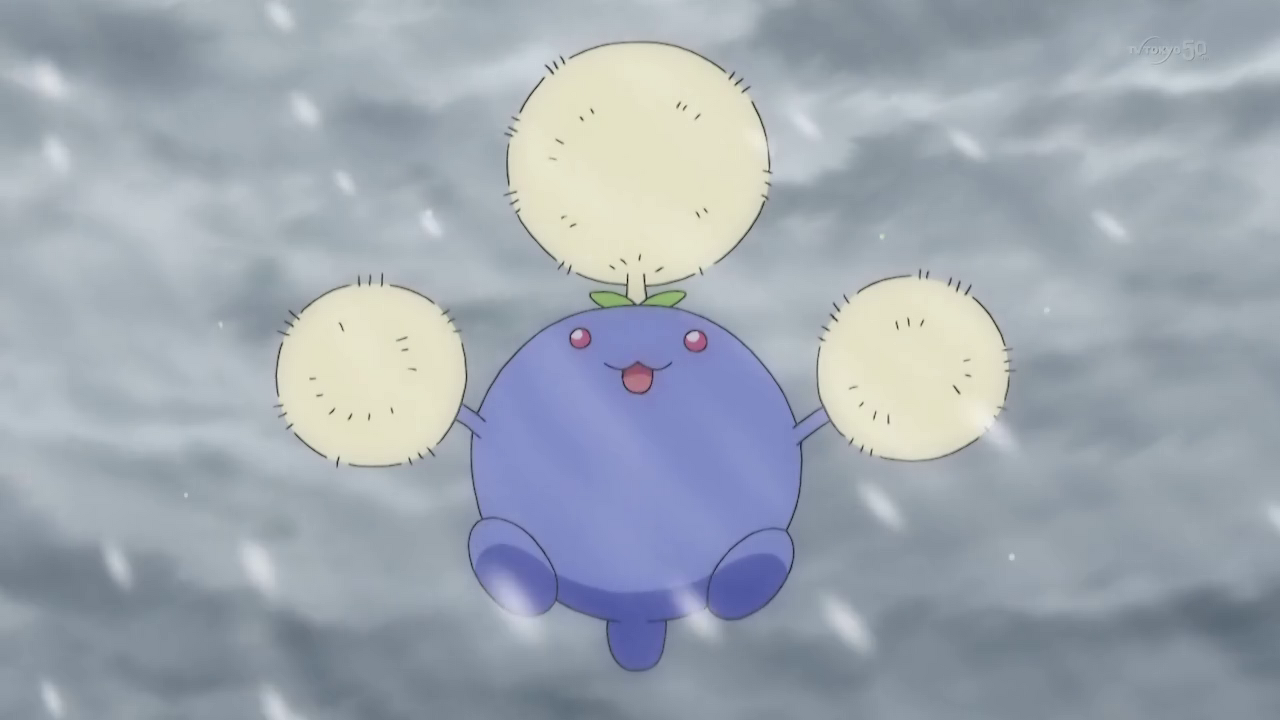 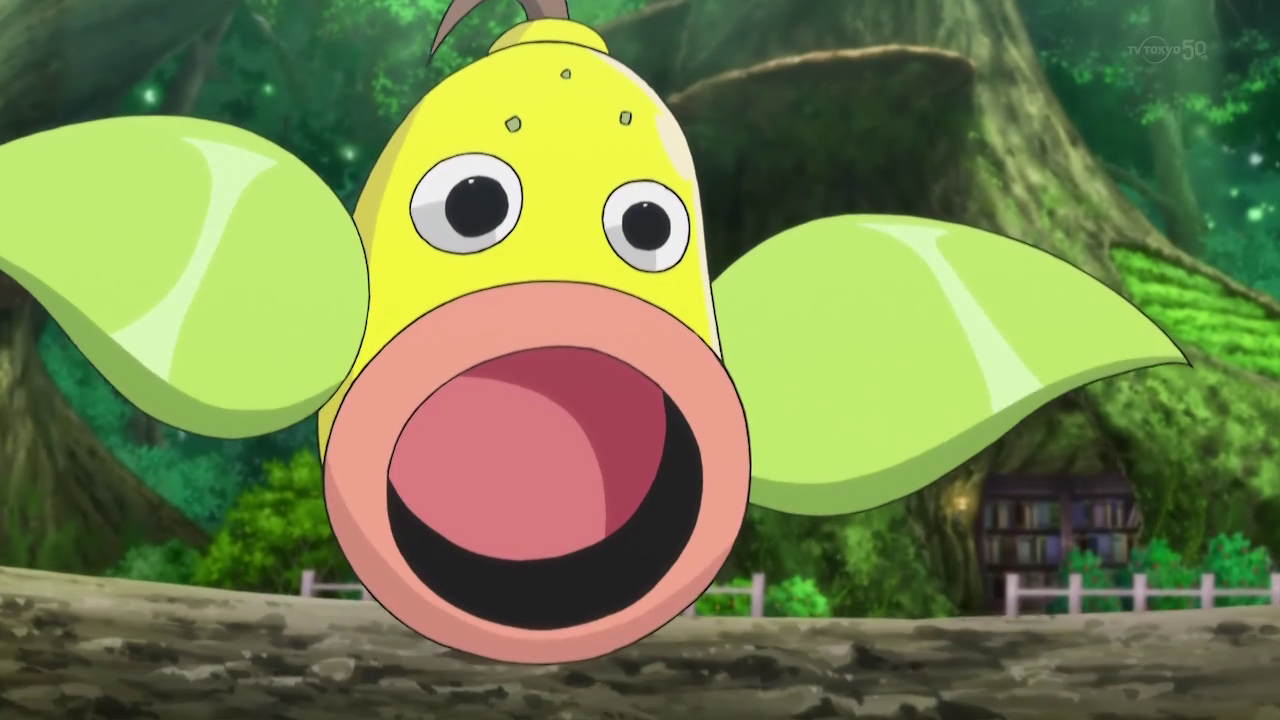 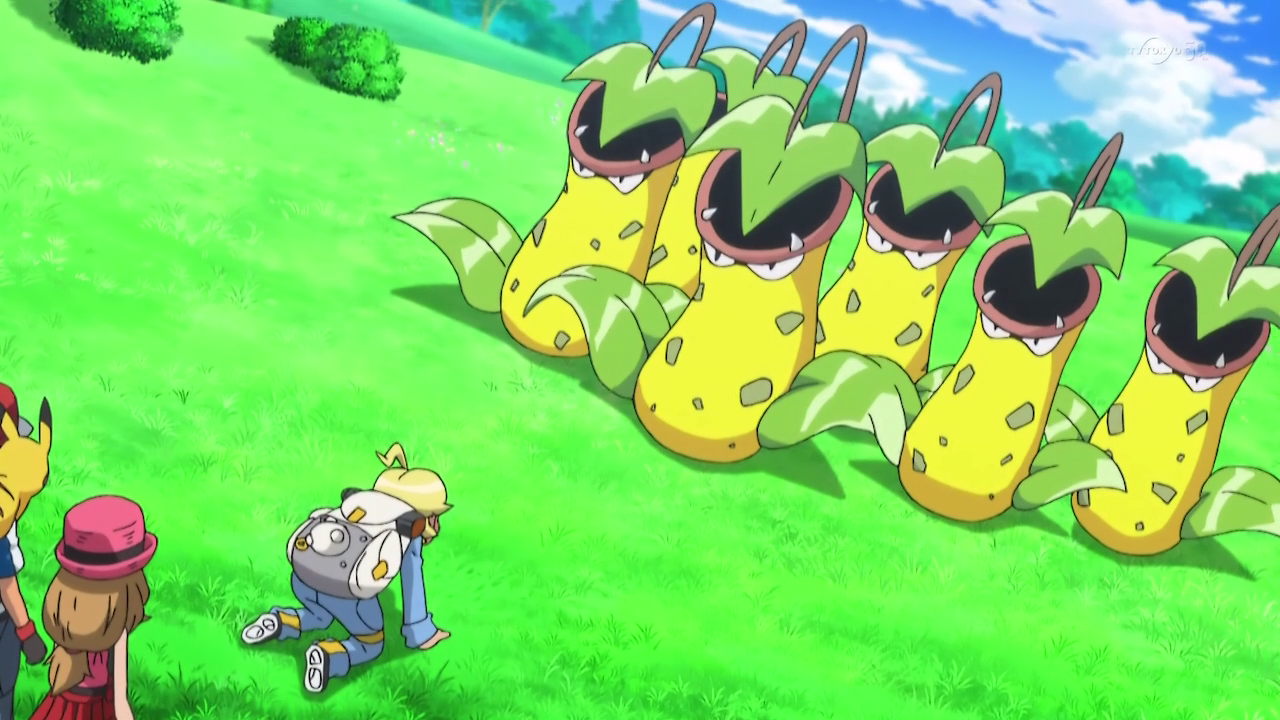 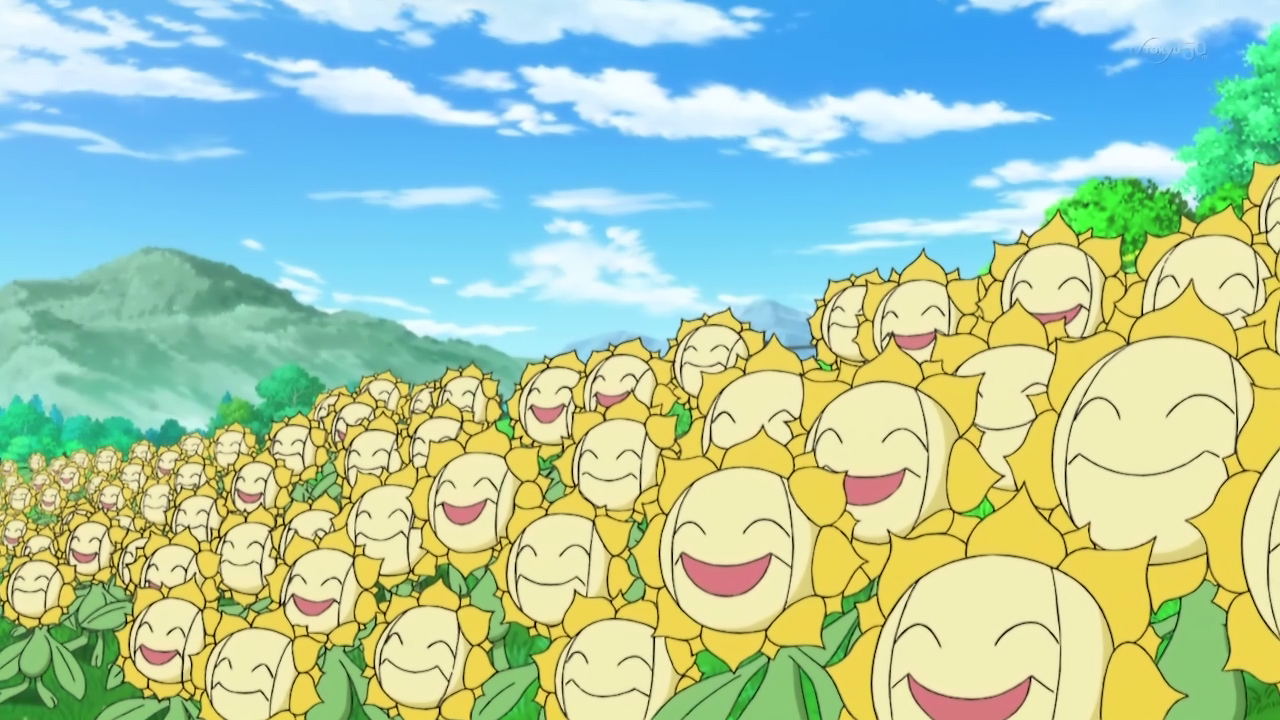 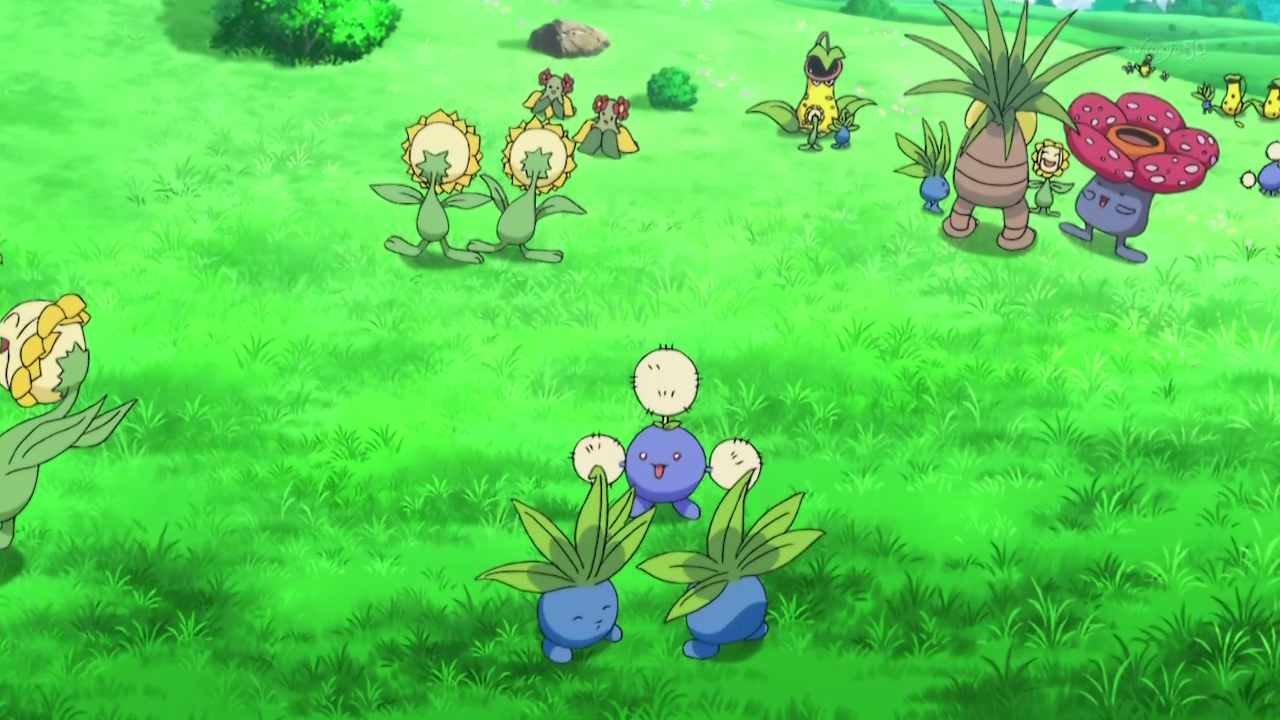