The old growth is still in bloom!

Plant Badge
Ramos is a Gym Leader that appears in Pokémon X and Y. He gives the player character the Plant Badge after they defeat him.

Despite his age, Ramos is active and likes to tease people (though he can be calm and soothing when it's needed). However, his advanced age gives him vast intelligence and experience, which he often uses to lecture people and give them advice. Additionally, he also speaks with a very thick accent, which is represented by his dialogue referring to people as "yeh" and "yer."

The name Ramos comes from ramus (Latin for "branch") and "moss".

Ramos in Pokémon the Series (anime) 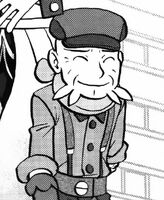 The player and Ramos in his Gym.
Community content is available under CC-BY-SA unless otherwise noted.
Advertisement