Raihan (pronounced Rai-han) is a Gym Leader in the Galar region. He is acknowledged as the strongest amid the Galar Gym Leaders and also Leon's rival.

Raihan is a young man with a tall and slim build. He has black hair tied in a protective style with an undercut, light brown skin, and cyan-colored eyes. Raihan wears a black hoodie with dark blue, orange, and tan-colored accents, the Dragon-type uniform, and dark blue/orange shoes, as well as an orange hairband. His outfit resembles his gym's type, Dragon. The hoodie has a collar that resembles the teeth of an open mouth. The sleeves end as his elbows with orange cuffs stopping at his forearms. He sports a Dynamax Band around his right wrist.

Raihan has a flair for taking selfies of himself with his Rotom Phone. He is kindhearted to his peers, as well as having a strong rivalry with Leon. He is one of the few people in Galar who are able to knock out Leon's Pokémon. Despite the strong rivalry he has towards him, Raihan respects Leon as a worthy advesary.

Unlike his fellow gym leaders, who each specialize in a single Pokémon type, Raihan focuses his battle strategies on weather conditions, such as sandstorms and harsh sunlight. In his initial Gym battle, Raihan uses a mix of various Pokémon (all of them being Sandstorm-resistant), but in the Champion Cup, its rematch and the Galar Star Tournament, Raihan's Pokémon are primarily Dragon-types.

Raihan's name means "best one" in Hindi, referring to both the Dragon type's powerful reputation and Raihan's position as the eighth and final Gym Leader in Galar. His name also means "Heaven's flower" in Arabic.

Raihan first appeared in the Gym Challenge ceremony alongside the other Gym Leaders (apart from Piers). In order for the player to challenge Raihan, they need to acquire the other seven badges first.

During Sonia's study of the legend regarding the Darkest Day, Raihan allowed her and the player to enter Hammerlocke's vault. There, he was intrigued with the player as they had been endorsed by Leon himself, so he had already expected them to be full of potential. As they had already acquired the three Gym Badges necessary to enter Hammerlocke, Raihan then sent them on their way to Stow-on-Side to get their next badge.

When the player returns with the seven required badges, Raihan's staff directed them back to the vault, where he expressed pleasure at their growth. However, before he would challenge them, he asked them to complete his Gym Mission, which involved defeating three Trainers he had taught his style to, consisting of fire, water and ice-based weather tactics. Once they were all defeated, Raihan agreed to challenge the player, utilising a sandstorm-based strategy. Raihan was ultimately defeated, causing him to realize that he had neglected his own training. As a sign of respect to them, he gave them the Dragon Badge, a replica of his uniform and the TM for Breaking Swipe.

The player would run into Raihan during the Champion Cup semi-finals, who had just defeated Piers in the quarter-finals. The player defeated him again, so he wished them luck and told them to prove that Leon could be defeated.

After the Champion Cup, the player, Hop and Piers start to go around the Gyms across Galar to deal with Dynamaxed Pokémon after Sordward and Shielbert began to cause havoc with them. At the Hammerlocke Gym, Raihan had them deal with a Dynamaxed Haxorus while he, Piers and Hop dealt with the remaining Pokémon. Once the situation was sorted, Raihan gave them his rare card and expressed the intention to fight Piers again without relying on Dynamax.

Raihan in Pokémon the Series (anime) 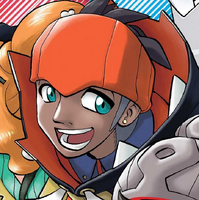 Unlike the other gym battles, Raihan's battle is a Double Battle.

As an opponent, Raihan can be paired with Leon, Piers or Melony.