Raichu is a rodent-like Pokémon, similar to its previous evolution forms. Unlike Pichu or Pikachu, which both have yellow fur, Raichu has orange fur with two strips of brown fur on its back. It has long ears and feet, but has little stubby arms with no noticeable fingers. Additionally, its electrical sacs are yellow, unlike its previous form's red coloring. It has a plump white belly, the tips of its arms and toes are brown. The soles of its feet are tan-colored and the paw pads on the undersides are yellowish orange. Raichu also have a long, thin, black tail that ends in a large lightning bolt shape.

In its Alolan form, Raichu now slightly resembles an Audino. Its tail is now in an oval shape that allows Raichu to stand on it as if it is actually surfing. Alolan Raichu also now has bright blue eyes, darker skin tone, white hands and feet, and yellow ears pointing upwards.

Male Raichu have tips on their "lightning bolt tails" while females have flat ends on them.

However for a time being, it remains unknown whether the Alolan Raichu have a similar gender differences on their tail as their original Kantonian counterpart.

Raichu has the ability Static and the hidden ability Lightning Rod. Static allows Raichu to paralyze its foe when making a physical move. Lightning Rod allows Raichu to draw in all Electric-type attacks. Alolan Raichu has the ability Surge Surfer which doubles its speed when Electric Terrain is active. When or not in battle a Raichu can use it's long tail to grab and restrain opponents or hold and carry things seen in "PJ018" and "PJ036".

Being part-Psychic-type, Alolan Raichu can also learn Psychic apart from learning Electric type moves, even having the chance to learn the rare move Speed Swap. Able to control psychic powers, Alolan Raichu gathers psykenosis into its tail and uses it to ride around. When you scrub its cheek pouches, they emit very sweet aroma.

Raichu is more confident, faithful and powerful than Pikachu, which makes them rivals, but sometimes it is just as friendly and cute. However, if it stores too much electricity in its body, it can become extremely short-tempered and aggressive. Yet, some of them are timid and will run away from people.

Usually, Alolan Raichu are often more playful than their normal counterparts. They use their surfboard-like tails to ride waves and to float in mid-air. When their cheeks are rubbed, they emit both electricity and a sweet-smelling aroma. Locals of the Alola region often states that Raichu got this change from eating lots of fluffy pancakes, which are a common delicacy in the Alola region.

Raichu is the evolved form of Pikachu, and the final evolutionary form of Pichu. Pikachu can evolve into either form of Raichu by the use of a Thunder Stone, but will only evolve into Alolan Raichu in Sun and Moon (and Ultra Sun and Ultra Moon unless it is evolved in Ultra Space). Before the release of Pokemon Bank for Sun and Moon, the normal form could not be obtained in either games without trading. 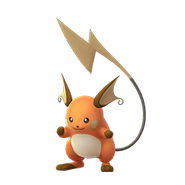 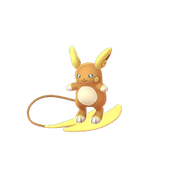 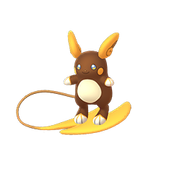 Raichu made its debut appearance in the episode Electric Shock Showdown, under the ownership of Lt. Surge, the Gym Leader in Vermilion City. In this episode Ash's Pikachu is defeated in a one-on-one battle with Lt. Surge's Raichu, which then leads to Surge commenting on how Ash could never defeat his Raichu because his Pikachu was too weak.

Ash and Pikachu both, refusing to go through with evolving Pikachu in order to increase its power, face off against Lt. Surge again, this time using speed rather than power. By tiring Raichu out, Pikachu defeats Raichu and wins the battle.

A Raichu was among the four Pokémon to bully and harass Ash's Pikachu along with several of Ash's other Pokémon in Pikachu's Vacation, but they later apologized for their obnoxious behavior and helped them free Ash's Charizard, whose head was stuck in a pipe.

Another Raichu, under the ownership of a trainer named Sho, was seen in Pika and Goliath!. Sho's Raichu used Hyper Beam at point blank range on Ash's Pikachu causing it to be in critical condition. This episode was very similar to the previously mentioned Electric Shock Showdown episode.

A different Raichu appeared in The Orange Islands in Stage Fight! under the ownership of one of the performers Kay. When Kay first got Raichu she got scared of being shocked when it discharged electricity when it hugged her as such Raichu got nervous around people. But because of Ash they eventually made up and became a proper team and Raichu started performing with the other show Pokémon.

Another Raichu, named "Sugar" was seen under the ownership of an elderly woman named Abigail in the episode Cooking up a Sweet Story.

In the first episode of the Summer Camp for Pokémon episodes, Ash was given a Raichu to train and battle who was shy but warmed up to Ash, though Ash had to return it after the battle.

Another Raichu, under the ownership of Volkner, the Gym Leader in Sunyshore City first appeared in Flint Sparks the Fire!, he doesn't use in a Gym Battle.

Another Raichu, under the ownership of Tierno first appeared in Good Friends, Great Training!.

Alolan Raichu made its debut appearance in the episode Racing to a Big Event!, under the ownership of Nina.

Another Alolan Raichu, under the ownership of Hau first appeared in Battle Royal 151!, he doesn't use in a Gym Battle.

Physiologically, Raichu resembles the kangaroo rat. Its PokéDex entries of being able to electrocute elephants may reference the documentary by Thomas Edison named Electrocuting an Elephant, in which electricity was tested to kill such animals.

Alolan Raichu might be based on the Surfing Pikachu, but it might also just be based solely on surfing, which was invented in Hawaii. Its design is also similar to when Raichu uses the move Surf in the Pokémon Stadium series, in which it rides on its tail. Also, Alolan Raichu's designer; Atsuko Nishida, stated that the motif of the design was bread, which is possibly why Alolan Raichu is often associated with pancakes in the anime and games.

The name Raichu originates from the Japanese word rai, which means "Thunder", and "chuu", a word referring to the squeak made by a mouse. Its name is also very similar to the Raiju, a lighting creature from Japanese mythology. 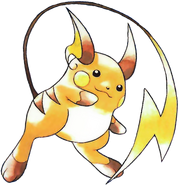 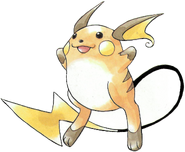 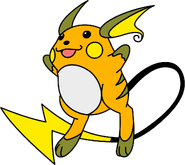 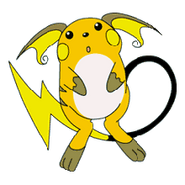 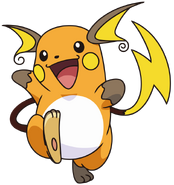 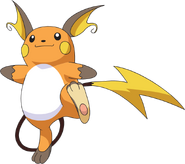 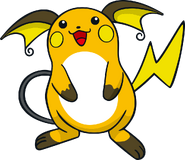 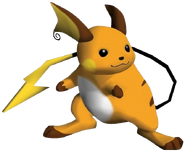 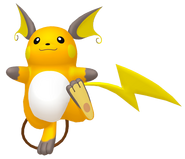 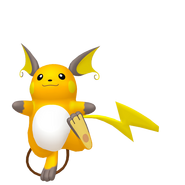 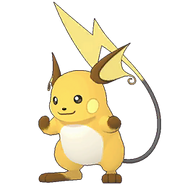 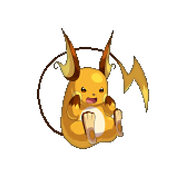 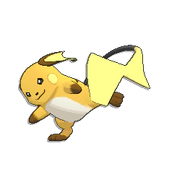 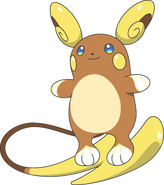 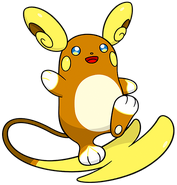 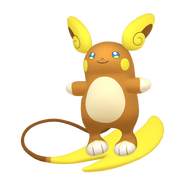 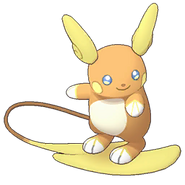