Ring Around the Roserade II

Rad Rickshaw is a character appearing in Pokémon Adventures.

When Rad Rickshaw was young, he used to spend time looking at the giant statue of Palkia, and memorized the words that were inscribed on it.[1]

Rad Rickshaw was kidnapped by Team Galactic. Though he didn't say a word about his Clefairy, he heard the enemy speaking about his Pokémon, connecting them to the moon and space itself. It made Rad Rickshaw wonder, since Clefairy were known to fly to space and gather items out there.[2] The grunts surrounded Rad Rickshaw, and had a machine speak to him. The machine was controlled by Cyrus, who demanded Rad Rickshaw to tell everything about Dialga and Palkia.[1]

Rad Rickshaw was attacked and taken to Team Galactic building at Eterna City. Cynthia was told of this attack, and went to investigate. Hearing Rad Rickshaw's cries for help, Cynthia's Spiritomb used Psychic to use the leaves and water, which were emitted from Diamond's Grotle and Platinum's Prinplup during their training, to free Rad Rickshaw. The grunts dispersed, pleasing Rad Rickshaw, who wanted to thank the person who rescued them. He later met Diamond, Pearl and Platinum, and mistook them to be his rescuers, since he saw leaves that Grotle emitted. To reward them, Rad Rickshaw sent a man to give them three foldable bicycles.[3]

At night, Rad Rickshaw encountered Pearl at his bike store in Eterna City, who attacked his Clefairy. The two met an understanding, and Rad Rickshaw explained his Clefairy were very cautious since the incident happened.As a helicopter flew in the sky, the two hid behind a corner. Pearl explained Team Galactic was aiming at blowing up Lake Valor, and explained what happened with Team Galactic. Rad Rickshaw nodded, and decided to accompany Pearl on Tandem Bike. The two cycled away quickly to gain the advantage, so Pearl could plan his strategies against Team Galactic on that lake.[2] As they cycled ahead, Pearl asked Rad Rickshaw about the giant statue he saw in Eterna City. Rad Rickshaw laughed, as the statue was there for a long time when his ancestors were in the town. He did note that the plaques on the statue stated something about Dialga and Palkia, who can grant people the power over space and time. Pearl became shocked, as this could be directly involved with Team Galactic's plans. Rad Rickshaw admitted that the enemy interrogated him, since they knew about his ancestors, and their knowledge about the statue, too.[1]

Rad Rickshaw and Pearl managed to arrive to Lake Valor, and Pearl thanked the guy for helping him. They sent their Pokémon to scout, suspecting trouble ahead. Since there was nothing around, Pearl went on a log, and had Chimler emit fire as a jet, so he could speed up, despite Rad Rickshaw stating that's dangerous. Nevertheless, Rad Rickshaw sensed a lot of determination from Pearl, and tried to search for Team Galactic, but got pulled by a tentacle. A moment later, Rad Rickshaw was beaten up by Octillery, and was left on the coast.[4] His Clefairy helped him not to get blown away by the blast from the Galactic Bomb, which evaporated all the lake's water.[5] Rad Rickshaw woke up, and became shocked that the entire Lake Valor was missing. He encountered Pearl, who muttered that he failed to protect Azelf, and went unconscious.[6]

Rad Rickshaw tried to wake Pearl up, but failed. He saw that the air shuttle was going to Veilstone City, and remarked that Azelf had been captured. Rad Rickshaw started panicking on what to do, but a man visited him. Seeing that the lake had evaporated, the man had his Quagsire and Floatzel refill the lake by using Rain Dance. Crasher Wake unveiled himself, which made Rad Rickshaw quite happy to see his wrestling idol. Crasher Wake was pleased to encounter a fan, and the two went on dry land while carrying Pearl.[7] Rad Rickshaw observed Pearl's training, and noted he was quite exhausted, but was willing to continue. At the end of the training, Pearl went on his Rayler to ride away, which surprised Rad Rickshaw that he didn't even want to get some rest.[8] Rad Rickshaw gave Pearl the bicycle he had repaired, and observed him going to Veilstone City.[9]

Rad Rickshaw came out of his bike shop with his two Clefairy. However, Giratina's rampage caused him to be unconscious, and Cliff and Cliffette dragged him away from the chaos.[10] 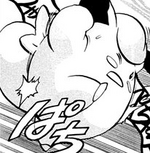 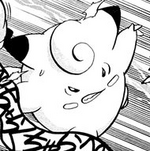