Due to a mistake, the heroes sail away to an island, with their actual destination being Mossdeep City. On the island, they find Jimmy, who trains to become a judge. With teacher Serena's help, Jimmy tries to be the referee of a Double Battle of Ash vs. Brock. After the battle, Jimmy recalls his past before he has to rescue his Pokémon, who were stolen by Team Rocket.

The heroes run to the boat to Mossdeep City, as they are late to catch it. May blames Ash that he ate his breakfast for too long, while Ash blames her for admiring her ribbon for too long. When they arrive to the boat, Max heard the boat isn't heading for Mossdeep City, but for Bomba Island. The heroes calm down when they arrive. Max heard they'd have to take detours before arriving to Mossdeep City. May thinks this island hopping could be fun, while Ash hopes to see rare Water-type Pokémon. Suddenly, they see an Ivysaur, Charmeleon and Wartortle carrying some stuff. May mistakes them to be Venusaur, Charmander and Squirtle, but Max corrects her to be Ivysaur, Charmeleon and Blastoise. Max realizes he made a mistake on the third one, so Brock tells the last one is a Wartortle. A man runs, carrying some stuff too, but trips over.

Ash asks if he is okay, but the man assures him he is fine. May notes how his Pokémon are cute, while the boy introduces himself as Jimmy. Jimmy asks if they are here for the Pokémon Battle Judge Training Institute, a type of a school. Jimmy is told the heroes are going to Mossdeep City. Jimmy tells people wishing to be judges for battles come here to learn. Jimmy tells the teacher, Serena, the boxes have arrived. Brock, much to his friends' embarrassment, is amazed by Serena. She is being told they were going to Mossdeep Island actually, so Serena asks Ash if he wants to help her. Brock tries to impress Serena, but gets pulled away by Max, who states the former should visit the principal's office. Team Rocket spies on their enemies from their submarine, and Meowth thinks it would lift their boss' spirits when he sees Jimmy's Pokémon. With promotions in their minds, they plan to snatch the Pokémon. Ash and Brock will have a Double Battle for a demonstration, with Jimmy as a referee. Ash sends Corphish and Swellow, while Brock sends Lombre and Mudkip.

As both sides promise to give it all they got, Corphish uses Bubble Beam, while Swellow stays close to it. Lombre stops the attack, but is pushed away. Mudkip pushes Lombre to prevent the attack. Swellow uses Aerial Ace, hurting Mudkip and Lombre. Ash is glad the attack worked, while Max thinks Ash planned to use the move from the beginning. While May notes how Ash's training paid off, Serena warns Jimmy to pay attention to the battle. Corphish uses Bubble Beam, knocking Lombre out. Brock panics, but tells Lombre to lie down for a while. Jimmy is confused, thinking Lombre has fainted. Swellow goes to use Wing Attack, but Lombre gets up and strikes with Razor Leaf, cancelling its attack. Mudkip and Lombre use Water Gun, so Corphish takes both hits. Jimmy is indecisive, seeing Corphish took both Water Gun attacks. Jimmy announces that Corphish is unable to battle, but Ash objects, as Corphish stands up. Serena points out Corphish did take both hits, but it did half the damage, since Corphish is a Water-type Pokémon. Serena claims Jimmy made his judgement too early, pointing he needs to have more self-confidence.

That night, Ash sees how tough being a judge is. Brock knows well a judge must know the Pokémon, as well as their attacks, before making the judgement. Max recalls it is an honor to be a Pokémon League Judge, as it requires a lot of effort and hard work to do. Brock points out only a handful of people become judges, hence why people like Jimmy work hard to become one. Suddenly, Pikachu spots Jimmy with his Pokémon. The heroes approach Jimmy, who is thinking about something. Ash apologizes for being harsh during the battle, but Jimmy claims he messed up with his judgement, not Ash. Jimmy told his Pokémon about his judgements and admits he was a trainer, too. Elsewhere, a strange machine comes out of the ocean and to the beach. Jimmy tells the heroes how he met his Pokémon: he got Squirtle, who evolved into Wartortle, then ran into Ivysaur and Charmeleon. One day, Jimmy and Wartortle were lost and while they tried to convince the other side to eat the last sandwich, the sandwich fell down, into Ivysaur's mouth. Ivysaur began to follow them and guided them out of the forest. When he fell in a river, Ivysaur and Wartortle pulled him out and he got a yellow Magikarp out of his shirt. A man came by and begged to trade the Magikarp for his Charmeleon, so Jimmy did the trade.

The heroes are amazed about this story, noting how Jimmy was lucky to obtain Charmeleon. Jimmy also shows them the Cascade Badge, as Ash and Brock think Jimmy battled Misty. However, he explains he was cleaning the pool in Cerulean Gym with his Pokémon, a woman, Daisy, gave them the badge for the work. May thinks Jimmy was lucky to have obtained the badge, as the Gym Leader was not around when he visited the Gym. Jimmy admits he never actually won a battle and one day, he slept in a boat in Lilycove City and the boat simply drifted away to the Bomba Island. So, he got in the Judge institute to train as a judge. May thinks Jimmy is quite lucky, but he admits he is not skilled enough to be a judge nor a trainer. Serena appears, saying that even if he might not be a judge or a trainer, he is still kind.

Suddenly, Team Rocket appears and take Ivysaur, Charmeleon and Wartortle and place them inside Poké Ball casings on the robot. The robot goes away, though Jimmy climbs up the robot and tries to break the casings with a rock. While Team Rocket notices, Meowth pulls a lever, which shakes the robot, causing Jimmy to fall. Jimmy loses all hope, but Serena gives him confidence, for his heart is what it caused him and his Pokémon to be together. The heroes think the Pokémon chose to be with Jimmy, whom Serena tells he has to forge his own destiny, causing Jimmy to believe it is not luck that got him thus far. The Pokémon strike to break fre and Jimmy goes to them, but when he is pushed by the robot arm, Wartortle evolves to Blastoise. The case brakes, freeing Blastoise while it frees Charmeleon and Ivysaur using Hydro Pump to break the cases. Ivysaur uses Razor Leaf, Charmeleon with Flamethrower and Blastoise with Hydro Pump, blasting Team Rocket off.

The heroes cheer for Jimmy, who thanks his Pokémon. Serena tells Jimmy Wartortle evolved because of Jimmy's heart. Jimmy doubts that, but the heroes convince him that is the truth. Serena expels Jimmy from the Judge institute, saying he will become a much better trainer than a judge. Jimmy is glad to hear that and promises to forge his own destiny. Ash sees Jimmy is his new opponent, while Serena wishes to be the judge of their next battle. The next day, Jimmy decides to go back to Lilycove City, so May wishes him luck. Ash admits Serena's class was fun. Serena thanks him and Brock, the latter flirting with her, but Max pulls him by his arm. The heroes leave the island via a boat, saying farewell to Jimmy and Serena, who wish Ash luck in the Gym Battle. 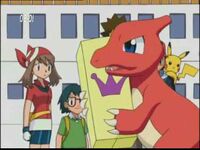 The heroes notice a Charmeleon carrying a box 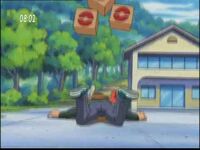 A man falls down and drops his boxes 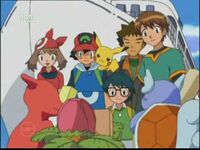 The heroes meet the Starter Pokémon in middle evolution 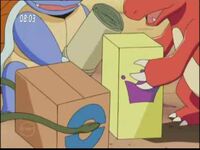 The Pokémon place their boxes on the ground 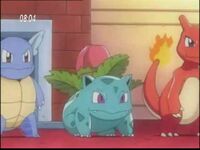 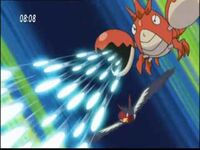 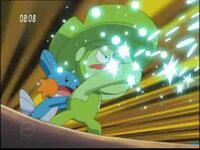 Mudkip pushes Lombre, who defends itself 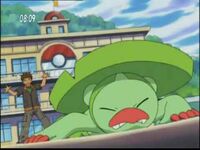 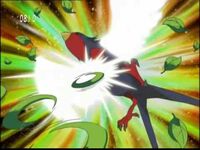 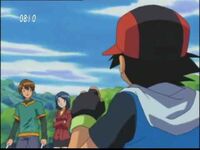 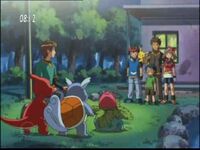 The heroes meet up with Jimmy 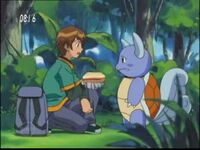 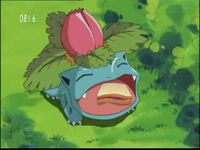 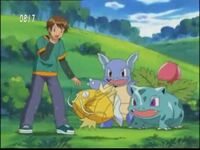 Jimmy fished out a golden Magikarp 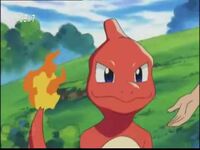 A fisherman gave Jimmy a Charmeleon 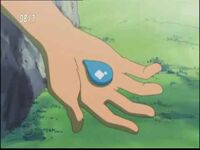 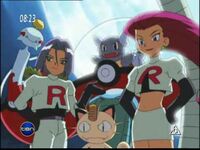 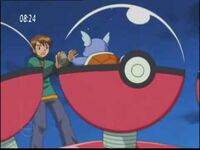 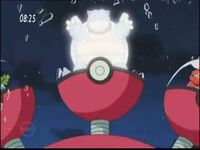 Wartortle evolves into Blastoise and frees itself 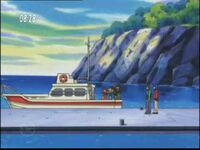 The heroes sail away
Add a photo to this gallery

Retrieved from "https://pokemon.fandom.com/wiki/RS092:_Judgment_Day!?oldid=1289447"
Community content is available under CC-BY-SA unless otherwise noted.