Let Bagons Be Bagons (飛べ、タツベイ！明日にむかって！！ Fly, Bagon! Towards the Future!!) is the 3rd episode of Pokémon: Advanced Challenge.

On the way to Fallarbor Town and May's next contest, Ash and co encounter a rare Bagon and it's trainer, a girl named Michelle, who is trying hard to make Bagon's dream of flying high come true. So Ash challenges her to a battle to get it to evolve faster. Will his plan work? And what could Team Rocket do with a Bagon anyway?

The heroes are traveling near a mountain slide, where Ash spots a Bagon. The heroes comments on Bagon's hard head, which could badly injure them. Suddenly, Bagon descends down to attack, so the heroes flee, causing Bagon to destroy a rock. Ash sends Taillow and Bagon chases it. Bagon comes at the top and descends down, so Taillow stops itself, in time from getting hurt. Bagon smashes the rock and Taillow uses Wing Attack, but a woman appears, calculating Taillow's attributes and orders the Bagon to move. Bagon does so, causing Taillow to miss. The woman accuses them of attacking Bagon, but when the heroes explain Bagon attacked them first, she realizes she was wrong and removes her glasses, charming Brock for her appearance.

Brock flirts with the woman, whose name is Michelle. Bagon strikes the rock again, with Michelle calculating the moves and catches it in her hands. Michelle admits her glasses allow her to communicate with Bagon, as well as to calculate its moves. Michelle thinks Bagon wants to fly when it falls down to destroy the rocks, for it has a dream to fly through the sky, like Taillow. Ash and May feel the same way Bagon seems to, though Max claims they both are immature. Brock remembers the Bagon evolves into Shelgon then into Salamence, which gains the ability to fly. Ash advises to Michelle they have a battle to let Bagon evolve sooner. Team Rocket observes and Meowth imagines that their boss would build a base in a jungle and to avoid heat, he'd use Bagon to crack a coconut and drink its milk, as well as give Team Rocket all bonuses.

Team Rocket appear in a helicopter and Meowth, equipped by a jetpack Jessie controls, is launched away. Pikachu dodges Meowth, who grabs Bagon. Ash sends Treecko, who uses Bullet Seed, making Jessie's remote fall down and Meowth spin around. Meowth disappears, so James flies the helicopter after him. Michelle finds the remote control, telling they could control the jetpack if they come closer to it. Jessie and James use a giant net to get Bagon and Meowth, but Meowth changes direction, goes through several bushes and hits into a tree. The heroes search for the Bagon, with Michelle commenting how she is impressed by Ash's Pokémon, how well trained they are. Ash tells the Pokémon deserve the credit, since he only helped them to become this way. Ash tells Michelle the Pokémon will learn the attack sooner if both the trainer and Pokémon want to. Michelle understands, seeing she and Bagon need to believe in Bagon's power and never give up on getting it to evolve.

Jessie and James have arrived near Meowth and Bagon. Bagon tells Meowth it wants to use the jet pack to fly. Jessie and James are skeptical, for they don't have the remote, but Meowth scratches James. Meowth remembers well he practiced human speech, so he encourages Bagon not to give his dreams down. Jessie and James are disappointed when they hear so much encouragement from a member of Team Rocket. Meowth reminds them if the boss were in a helicopter, the Bagon (flying) would open his coconut, and would give them promotions. The heroes found Team Rocket and Pikachu uses Quick Attack, hitting Team Rocket. Bagon is safe, but Team Rocket captures Pikachu with a cuff and flies off. Bagon, along with Treecko, decide to fly (using jet pack) to free Pikachu. While Team Rocket laughs at Pikachu's attempt to free himself, James notices Bagon and Treecko are flying with the jetpack.

Bagon goes through the helicopter, leaving Treecko inside. Jessie brings Seviper, but its size is too big for the small helicopter. Meanwhile, Bagon trashes the helicopter and Treecko uses Bullet Seed. Pikachu is freed and jumps on the jetpack, then uses Thunderbolt to blast Team Rocket off. The heroes notice how Bagon is flying, as Max remarks how Bagon's dream actually came true. At the end of the day, after Bagon descends down, it evolves into a Shelgon. Michelle is glad and hugs Shelgon, for it did not give up on its dream. Max notices the Pidgeotto flying, while Brock thinks they are symbol of Shelgon's dream to fly one day with its own wings. 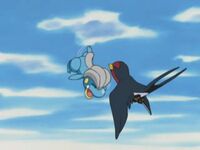 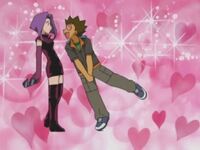 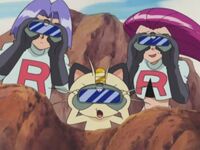 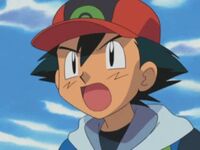 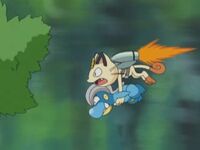 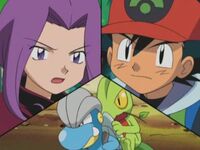 Ash and Michelle have Bagon and Treecko fly up 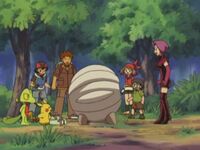 Michelle's Bagon evolved into a Shelgon 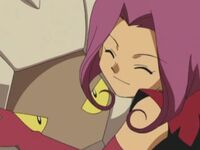 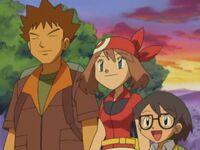 Brock, May and Max watch at the sky 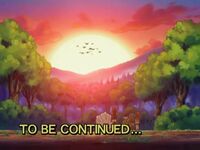 The Pidgeotto fly off, as Shelgon dreams to fly as well one day
Add a photo to this gallery
Retrieved from "https://pokemon.fandom.com/wiki/RS043:_Let_Bagons_Be_Bagons?oldid=1322635"
Community content is available under CC-BY-SA unless otherwise noted.