What You Seed is What You Get
キモリの新技!!スイカ畑のタネマシンガン！

Ash's Treecko learns Bullet Seed. Ash and co. go to Fallarbor Town.
What You Seed is What You Get (キモリの新技！！スイカ畑のタネマシンガン！ Treecko's New Move!! Watermelon Field's Bullet Seed!) is the 1st episode of Pokémon: Advanced Challenge.

After earning the Dynamo Badge from Wattson, Ash and co. continue their journey. May insists to go to Fallarbor Town while Ash suggests they go to Lavaridge Town. Max suggests they go to both and Brock decides the order. During the trip, they notice some watermelons float down by the river and have some lunch. Ash then comes up with an idea: Teach Treecko to use Bullet Seed like the Shiftry that attacked them a while back, and as practice, they try it by spitting watermelon seeds. Can Treecko learn to master this move, and who do the watermelons belong too?

Having earned the Dynamo Badge, Ash is going to the next Gym, but wonders where it is. May tells their destination is Fallarbor Town, where May's going to another Pokémon Contest. However, Max tells that the next Gym is in Lavaridge Town, causing Ash to argue with May to go to Lavaridge Town for the Badge. Brock calms them down, while Max tells them Fallarbor Town is near Lavaridge Town, so they can visit both cities. Ash calms down, inspiring May to do her best in the next Contest. Team Rocket is looking for the twerps, but are also hungry. Suddenly, Team Rocket spots a field full of watermelons. As they begin to grab them, they see an enormous watermelon which begins to roll. However, the watermelon is actually an Electrode, painted like a watermelon. The Electrode rolls out and blasts Team Rocket off, who drop the three watermelons, which fall down into a river.

The heroes are having lunchtime, while Max spots the watermelons in the river. Once Brock takes them out, Ash orders Pikachu to use Iron Tail, but Max and May disagree, since watermelons are a delicate fruit. Instead, May has Brock slice down the watermelons. The heroes enjoy the taste the watermelons. Suddenly, Ash spits the seeds, apologizing to May for such rude manners, since he always spat out the seeds. Ash has an idea and sends Treecko, asking it to eat the watermelon and spit out the seeds. Ash reminds May about Shiftry using such an attack before, called Bullet Seed. Ash demonstrates to Treecko how it is done, so Treecko tries it. Ash and Treecko practice more, with Treecko's attack being much more powerful with training. However, they are attacked by a Grovyle, who is accompanied with a Slugma. Grovyle uses Bullet Seed and Slugma Flamethrower, to prevent the heroes from escaping. A girl appears, stopping the attacks accusing the heroes being thieves.

The girl is pretty upset since those were her watermelons. Natasha, the girl, who has been growing the watermelons, denies the heroes just found them "floating in the river". Her Electrode, painted like a watermelon, goes to her, who denies these are the thieves it saw. Natasha claims it was an honest mistake and thinks they feel the same way, but starts blaming herself, though the heroes calm her down. Natasha asks if they were the best they tasted, which the heroes confirm. To make up for the mistake, Natasha decides to give them a tour of her field, where she grows the watermelons. Natasha panics, since she always forgets to say her name, so she introduces herself. The heroes visit the field, amazing them Natasha has a very large field, which takes a lot of responsibility. Natasha points her protect the fields and sends Electrode back to keep the watch.

Ash and Max are fond of Slugma and Grovyle, who showed a lot of power before. Natasha explains she's good in double battle. Ash admits he was in the top eight in the Johto League and wants to challenge Natasha, who accepts the challenge. Natasha sends Slugma and Grovyle, while Ash sends Treecko and Corphish. May wonders why Treecko, though Brock suspects Ash wants Treecko to battle to observe how Grovyle uses its own Bullet Seed. Treecko starts off with Pound against Grovyle, while Corphish uses Bubble Beam against Slugma. Grovyle dodges and uses Bullet Seed to negate Bubble Beam. Grovyle uses Bullet Seed on Treecko, while Slugma attacks Corphish with Ember. Corphish uses Harden and Treecko hides behind Corphish, who takes both hits. Treecko uses Quick Attack on Grovyle, while Corphish uses Crabhammer on Slugma. Grovyle dodges and uses Leaf Blade on Corphish. Grovyle uses Bullet Seed and Slugma uses Flamethrower. Corphish uses Harden, with Treecko hiding behind Corphish, who continues taking damage. Corphish is tired, but can still continue to fight. At the field Team Rocket appears again, thinking of whether they should steal the watermelons since the Electrode is still guarding them. Meowth imagines if their boss was in a desert to set a new base up for Team Rocket, he'd been given the watermelons and Team Rocket some promotions. Team Rocket cheers, while Electrode looks at them in confusion.

Later on, everybody eats watermelons, complimenting Natasha for growing such tasty watermelons. Ash spots Treecko, so he and Pikachu try to cheer it up. When they fail, Ash and Pikachu spit seeds on Treecko, who gets angry and uses Bullet Seed on them. Brock, May and Max praise Treecko for mastering the attack, though Ash does not think so, as he and Pikachu got hurt.

Ash and May argue where to go next 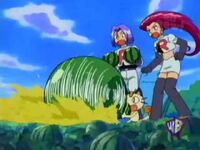 An Electrode blasts Team Rocket off 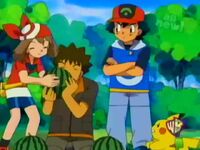 May lets Brock cut the watermelons, instead of Ash and Pikachu 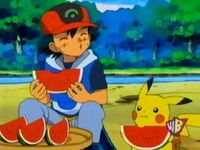 Ash spits the seeds out 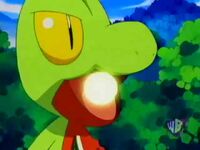 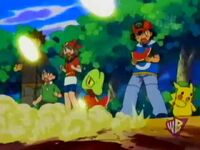 The heroes are attacked 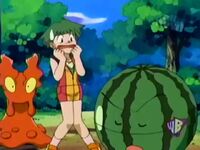 Natasha realizes she was wrong about the heroes being the thieves 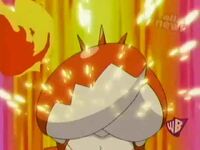 Corphish protects itself from Ember and Bullet Seed attacks 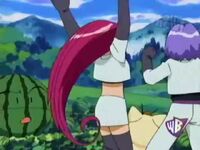 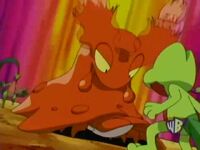 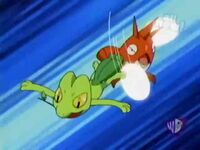 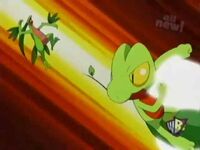 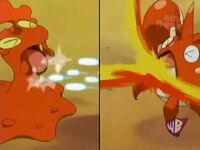 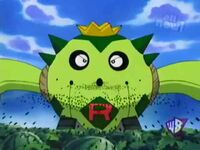 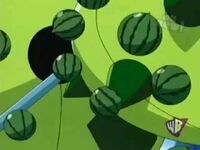 The machine releases the watermelons 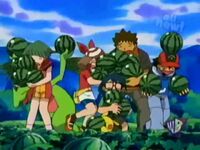 Everyone catches the watermelons 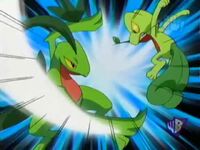 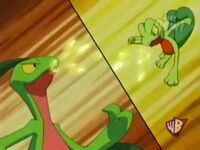 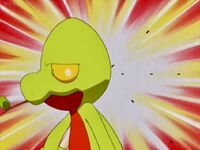 Treecko gets hit by Ash and Pikachu's seed they spat out 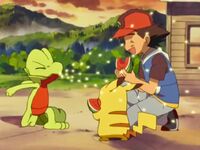 Treecko masters Bullet Seed on Pikachu and Ash
Add a photo to this gallery
Retrieved from "https://pokemon.fandom.com/wiki/RS041:_What_You_Seed_is_What_You_Get?oldid=1300878"
Community content is available under CC-BY-SA unless otherwise noted.