A Meditite Fight (バトルガールとアサナン！嵐の中で！ Battle Girl and Meditite! In a Storm! ) is the 30th episode of Pokémon: Advanced.

As Ash prepares for his rematch with Brawly, he, May, Max and Brock meet a Battle Girl by the name of Shauna, whose reason for battling was to prove she was better than Ash. During their battle Brock noticed that while Ash's training was paying off Shauna battled like Ash used to. Just as the match was about to be decided Brawly appears with some mondo bad news: A hurricane was approaching which could wipe out the beach. Can our heroes manage to weather the storm, and why is Shauna so nervous around Brawly?

Ash and his Pokémon train concentration; once the wave is about to strike, they run off and dodge the wave. As Ash and his Pokémon cheer for success, May and Max are glad Ash's training has paid off. Brock has made breakfast, so the heroes go to eat it. Suddenly, a girl is seen surfing, as she points at Ash, demanding a battle. Brock points out they are having breakfast, but the girl does not care. The girl goes to introduce herself, but get soaked by the wave. She introduces herself as Shauna, the battle girl. Shauna mentions she is Brawly's apprentice and girlfriend. Shauna demands a battle, so Ash decides to accept this challenge, as he sends Pikachu. However, both Shawna and Ash are hungry, so Brock offers Shauna to join them. Shauna immediately digs in, startling the heroes. Meanwhile, underwater in Team Rocket's Magikarp submarine, Meowth sees his enemies eating, as Meowth is also hungry. He smells food and sees Jessie and James eating food. They promise they have saved Meowth some food. Meowth thinks they should dig holes to trap their enemies, as they won't notice when they're eating.

After finishing breakfast, Ash and Shauna start arguing with each other, making May think they are like mirror copies of each other. Shauna is frustrated, as Brawly said Ash was a good Trainer, even better than her, so she challenges him to a fight to prove she's better. However, Brock interrupts, as Ash needs to clean the dishes up, since it is his turn today. Shauna helps him, but only to battle him later. Elsewhere, Team Rocket digs the holes, thinking what a great job they made for enemies to fall in. Meowth says "if they don't, then I guess we're the idiots", but he falls into one as Jessie and James stated that he deserved that. While Brock is gathering wood for the fire, but notices something odd, even seeing Shroomish, Seedot and Zigzagoon leave the forest. Nevertheless, Shauna and Ash have their battle, as Team Rocket is watching nearby. Shauna sends a Meditite to the fight, while Ash chooses Pikachu, who was watching something. Meditite starts with Focus Punch, but Pikachu dodges the attack. Meditite attempts to attack with High Jump Kick, but Pikachu evades again. Jessie is frustrated, as the Pokémon are dodging the holes they dug. Brock notices Shauna uses brute force like Ash once used to, while Ash uses moves like he was dodging the waves. Meditite uses High Jump Kick, so Pikachu uses Quick Attack. Before Meditite strikes, Pikachu dodges and uses Quick Attack.

However, Brawly appears, canceling the fight. Brawly came to warn them that a hurricane is heading towards the island, so they need to go find a safer place. Brock points out some of the Pokémon, including Pikachu, are sensing the hurricane is coming. Brawly wonders why Shauna is fighting, but when Brock explains to Brawly she went to challenge Ash, she shuts his mouth when he mentions "your girl". They move out, while Team Rocket goes in the Magikarp submarine to dive to the bottom to evade the hurricane. As the group goes to find a nearest cave, they encounter Seedot, who join them. Next, they encounter Shroomish, who also decide to join as well. Team Rocket tries to get in the submarine, but the hatch is broken. In a moment, they get blasted off by a wave. The group goes to the cave on the top of a mountain. To prevent anyone from falling down, the group holds hands, but Shauna does not want to hold hands with Brawly. May mentions that she's Brawly's girlfriend, but Brawly denies the fact, so Brock sees Shauna is not Brawly's top apprentice either. Since they have little time, Shauna holds Brawly's hand, as they continue towards the cave.

A thunder blasts some rocks, so Brawly sends his Hariyama to use Arm Thrust to deflect the rocks. A tree falls, so Pikachu uses Thunderbolt to destroy it. After Brawly compliments Ash for quick thinking, Team Rocket appears, being blasted from the wave earlier. The heroes are reluctant, but Brawly approves that Team Rocket also joins them to find the shelter from the storm. Later on, the group and some other Pokémon have gotten into the cave, but Shauna is separated from them. May asks Shauna to join them, but Shauna reluctantly claims she is fine. Brock asks why Shauna isn't Brawly's apprentice, so Brawly explains that she uses Pokémon as a brute force than to bonding with them. May compares her with Ash, but Ash denies that fact, since he has been training his patience. Per Brawly's request, Shauna comes to sit with others near the fire. Brawly starts to discuss the fact that nature is unpredictable and that everyone is powerless against it. Brawly states it is wiser to simply seek shelter than to prevent storms from happening, pointing the Pokémon have come here before they did. Brawly invites Team Rocket to join to the fire, to which they happily agree, but Meowth gets his tail burned.

The next morning, everybody awakes, but they notice the wild Pokémon are missing as Brawly states they went back to the forest. Team Rocket appears in front of the cave and by starting the battle to go after Pikachu, Jessie sends her Seviper and James his Cacnea, who clings the former. Seviper uses Poison Tail and Cacnea with Pin Missile, but Pikachu evades. Pikachu uses Thunderbolt, but Brawly stops the attack, as the walls would be destroyed. Instead, he sends Hariyama, who blasts Team Rocket off. Shauna challenges Ash one more time, to which Ash agrees. Meditite uses Focus Punch, but Pikachu waits and uses Quick Attack, but Meditite evades using Detect. Meditite uses Meditate, so Pikachu uses Quick Attack, but once more Meditite dodges. May, Brock and Max are surprised Shauna's strategy had changed, though Brawly knows this is because Shauna grew up with Meditite. Meditite uses High Jump Kick; Pikachu, as from Ash's orders, closes his eyes and feels Meditite arriving like a wave. Pikachu dodges the attack and uses Thunderbolt, defeating Meditite.

Brawly is quite impressed by Ash's tactics, seeing Ash balanced offense and defense quite well. Shauna comes to Meditite, who thanks Ash for the battle and claiming she has no hard feelings about her loss. Brawly turns on Shauna to see if she made progress. Shauna admits she did, but needs more training. Brawly decides he will take her as an apprentice, even if will be hard. Ash demands a rematch from Brawly, so Brawly will fight him. This time, however, Brawly takes them on a lone island. However, the sea level is decreasing, revealing a path to the island. 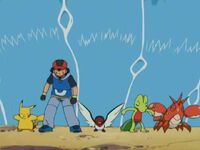 Ash and his Pokémon sense the wave coming 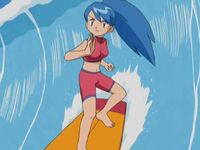 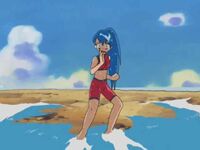 Shauna got soaked by the wave 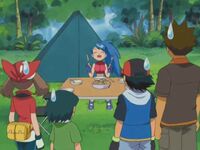 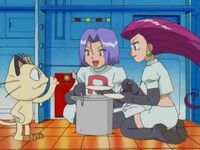 Team Rocket have a new plan 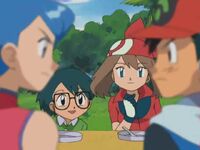 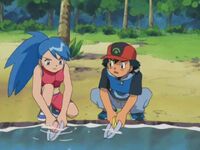 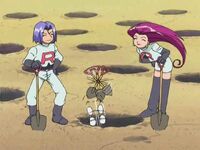 Meowth fell in the hole 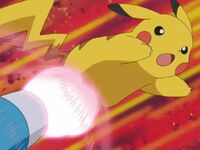 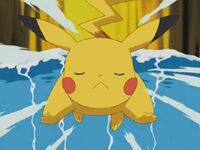 Pikachu senses Meditite as the wave 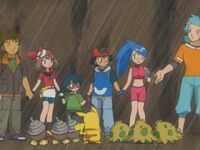 Everyone holds hands to go to the cave 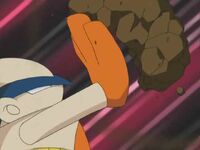 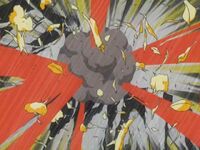 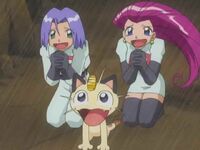 Team Rocket is delighted to hear they could accompany the group 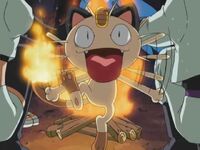 Meowth got his tail on fire 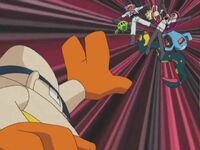 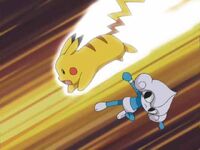 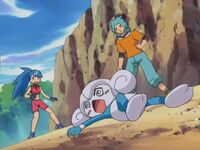 Meditite has been defeated 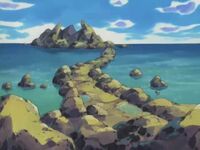 Retrieved from "https://pokemon.fandom.com/wiki/RS030:_A_Meditite_Fight!?oldid=1314499"
Community content is available under CC-BY-SA unless otherwise noted.