A mysterious Pokémon is terrorizing Dewford Town's beach. Ash and friends set many traps for the terror and discover its identity, Corphish. Will Ash and his friends be able is capture the feisty Water-type Pokémon, or will it set them out to dry?

James and Meowth are very cheerful today, since it is a good day to catch Ash's Pikachu. Jessie, however, thinks they should just relax for a while. Even Jessie's Wobbuffet is relaxing, despite James and Meowth being annoyed with their laziness. While James and Meowth demand to discuss their strategies, something attacks them, blasting them off. Ash and Pikachu are cheerful as well, as it is a good day for training. While Ash and Pikachu wash their faces, from water Brock's Lotad has been carrying on its head, Max and May brush their teeth, while Brock starts cooking breakfast. Ash trains his Pokémon for concentration, for Brawly managed to train his Pokémon to redirect the force of their opponents with surfing. While Max is soaking the clothes, May is surprised Ash is training, since she thinks they are just sitting around. Brock confirms they are training, for Ash requires a calm mind and patience, rather than a strategy. Ash's Taillow begins to react to the incoming wave, but Ash calms it down, since the wave is too far away. When the wave is about to strike, everybody goes away, but they are too late and get soaked by the wave.

Ash reminds his Pokémon that they need to train this technique to defeat Brawly properly. May and Max wonder why Ash isn't doing laundry, but Brock reminds them training isn't always about Pokémon. While Ash's clothes are drying, he and his Pokémon do it one more time. While Ash, Pikachu and Taillow go away, Treecko gets hit by the wave, as it didn't react in time. May and Max see Treecko's timing is off, while Ash wonders why aren't they getting any better. May thinks Ash should just train more, but Ash reminds May she should train for the Contests as well. Max supports Ash, but May admits she has started to train a bit. May knows well to impress the judge, one part is to show off a Pokémon's look. May sends Torchic and Wurmple, but they goof around. May tells Torchic and Wurmple to spin around and dance as she does, but Wurmple and Torchic are not trained properly to do that. Max reminds May she cannot bring out two Pokémon at once, while Brock points out May can't dance around, since the spotlight should go to the Pokémon. May admits she has taken Steven's battling style to her interest, which Ash approves of, since it can be applied during the Contests.

Suddenly, someone is digging through the tent, destroying it. Pikachu is about to use Thunderbolt, but it would burn the tent, so May's Wurmple uses String Shot, slowing the burglar down. Wurmple tries to pull the burglar, but the burglar is quite fast, so Wurmple cannot hold it for too long. Treecko holds Wurmple, but the burglar still moves. Everybody helps to slow the burglar down, but it still moves with amazing speed. The burglar moves to the sea, causing everyone to fall into the sea. The heroes' clothes and food are wet, so they wonder which Pokémon that was. Brock knows well this Pokémon has claimed this as its territory and will return. Ash is confident that he'll catch the Pokémon, even if May thinks it is a bad idea, thinking it is dangerous. Brock reminds her they have to camp here and need to know what they would face against. Ash rallies Max and Brock to find this mysterious Pokémon, forcing May to sigh in despair. Team Rocket, who was blown away by the attack earlier, wonder what that was. When Jessie goes to call Wobbuffet back, she sees the same thing, which attacked them before. Jessie goes to take her revenge, but stomps on a Pokémon, a Loudred, who blasts them off by yelling.

During the night, May is quite bored, since they wait for the Pokémon to come, while Brock suspects the food they placed as bait is not attractive to the Pokémon. Ash replies to May they are building concentration and patience this way. Max suggests May to sleep in the tent, but she is scared the Pokémon might attack her. Pikachu hears the Pokémon is coming, but Ash realizes too soon that it is coming behind them and they all get blown away. The Pokémon pushes the food away and chases May. Pikachu uses Thunderbolt, but the Pokémon disappears, in a hole. The next day heroes are tired, since they did not sleep through the night. May complains, wondering why they haven't moved to a different spot already. Ash, Max and Brock refuse, since they accomplished much and even Ash saw a red horn amidst the sand. Ash is confident "if it happened once, it'd happen once more". May wonders about that poem, making Max infuriated, as he shows Professor Oak's poem book. Brock's Forretress begins to dig holes to capture the Pokémon, even if this was Team Rocket's plan. Brock and Ash know how to make holes, since they have been falling into them for such a long time. May and Max reply this is just a low point for them to copy Team Rocket's plans.

During then night, Brock points out they dug the holes and he placed more food to attract the Pokémon. After some time, the heroes find something arrives, covered in seaweed and eats the Pokémon food. The heroes recall these are not the same Pokémon they saw yesterday, but seeing them happily eating, Brock places more food to lure them in. The Pokémon go after the food and fall into a hole. The heroes go to find what they caught, but the Pokémon start commenting how they fall in someone else's hole, seeing the heroes are here. The Pokémon are actually Team Rocket, who were covered in seaweed. Team Rocket removes the seaweed, furious how they should've been the ones digging the holes. However, the real Pokémon arrives, blasting Team Rocket off. As the Pokémon reaches towards the food, Pikachu uses Quick Attack to attack it; the burglar was a Corphish. Brock realizes, due to Corphish's aggressive personality, it was attacking everything and everyone standing in its way. Seeing how power it has, Ash is determined to catch Corphish. Pikachu uses Thunderbolt, but Corphish evades the attack and uses Bubble Beam, damaging Pikachu. Corphish digs and attacks Pikachu once more. Pikachu uses Iron Tail, but Corphish blocks Pikachu's tail. Corphish waves Pikachu in air and throws him on Ash's face.

The heroes saw Corphish actually used Pikachu's speed and power to topple him away. Ash sends Treecko, who, per Ash's order, waits for Corphish to attack. May and Max think it is not the best idea, but Brock supports Ash to see what happens. As the sun rises, Corphish attacks with Bubble Beam, but Treecko deflects the attack with its tail. Corphish uses Crabhammer, to which Treecko uses Quick Attack, hitting Corphish. Treecko uses Pound, knocking Corphish down. Ash throws the Poké Ball and catches the Corphish. Ash thanks Treecko for assistance, while Max, Max and Brock are glad Ash has been calm during the battle, else he would've lost. Ash sends Corphish, greeting it. Corphish waves Ash's hand, but it is too strong and throws Ash behind itself. 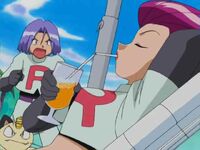 James and Meowth yell out to Jessie to stop relaxing 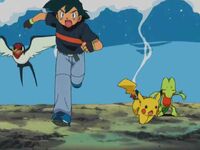 Ash and his Pokémon run away from the wave 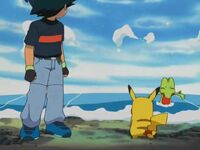 Treecko did not react in time and got soaked 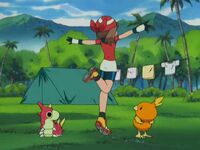 May tries to perform with her Pokémon 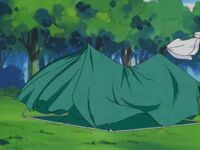 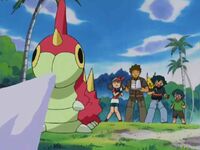 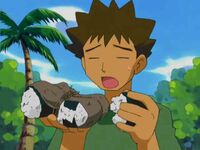 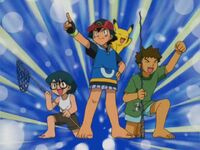 Ash, Brock and Max are determined to catch the Pokémon burglar 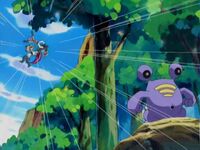 A Loudred blasts Team Rocket off 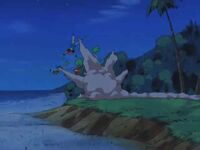 The Pokémon hits the heroes, blowing them away 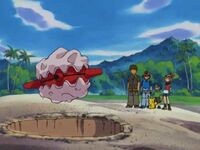 Brock's Forretress dug out some holes 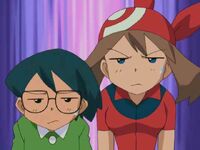 May and Max are displeased they are digging holes, just like Team Rocket 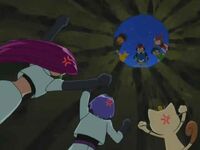 Team Rocket is angry they fell in their enemies' hole 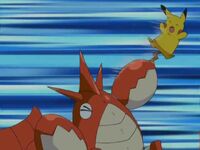 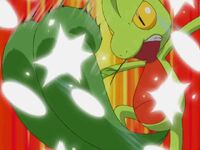 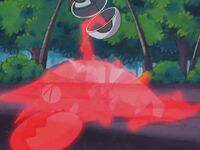 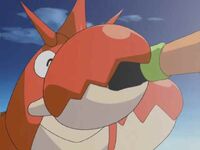 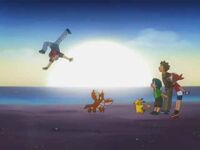 Corphish catapults Ash away
Add a photo to this gallery
Retrieved from "https://pokemon.fandom.com/wiki/RS023:_Gone_Corphishin%27?oldid=1314493"
Community content is available under CC-BY-SA unless otherwise noted.