On their way, the heroes encounter a bunch of Treecko. Ash goes after the Treecko, wanting to catch one, but notices a disagreement between one of the Treecko and its group. Seeing the Treecko cares much for its home, Ash and Pikachu decide to show respect by tending to the tree with Treecko.

Max argues with May that they have gotten lost in the woods. May simply replies there were cute flowers in the path they took and reminds Max the PokéNav should show the right way. Max replies they are out of the PokéNav's service. Brock separates May and Max, since arguing won't get them anywhere. Ash claims he, Brock and, Misty have lost many times and didn't make much fuss about it. Still, that does not amuse May or Max, who are still angry at each other. Ash spots something moving in trees, which, on closer inspection, is a Treecko. Since he was interested in catching a Treecko, since he saw in Professor Birch's lab, Ash throws the Poké Ball to catch one, but the Treecko deflects it with his tail. May reminds Ash about the words he said to her the other day: one must weaken a Pokémon to catch it successfully. Ash runs off to chase after Treecko, while May taunts Max, angering him for his slowness. Ash runs and sees an enormous tree, but falls down, tripping over a root and sliding down a slope. Once Ash stands up, Ash and Pikachu notice the tree has no leaves. Suddenly, a Treecko throws a stick near them.

Ash challenges the Treecko to a fight, to which Treecko climbs the branches and spits the stick from his mouth to Pikachu and attacks pounds him. Pikachu is knocked out, while Treecko taunts him. Pikachu uses Quick Attack, but Treecko evades the attacks, until it pounds with its tail. Team Rocket spots the battle and dream how their boss, Giovanni, would live with the Treecko and like it much, enough to give Team Rocket a promotion. More Treecko appear, with an elderly one approaching the one who fought Pikachu. The younger than pushes the elderly one away. Meowth translates the elder one's warning - the huge tree will die, even if the younger one stays and will be alone. The younger replies that the it was born at the tree and lives among the tree's branches, wanting to protect its home. James and Meowth begin to cry, but Jessie isn't amused - to her, life is exchanging old for new things (including houses), for there must be progress. All Treecko leave, except the one who fought Pikachu, so Team Rocket plans to catch the Treecko group.

The Treecko goes away in other direction, though Ash is confident Treecko would return soon, since this is its home. May, Brock and Max have lunch, having no idea what Ash and Pikachu are doing. Max worries about Ash, so May wonders if Max won't eat his food, she should take it. Brock believes as long as Pikachu is with Ash, they are fine, promising they could search for them after they would eat their dessert. Seeing the sun's dusk, Ash realizes he lost track of time. Since he still wants to catch Treecko, Ash sends Taillow and dismisses it to find and lead Brock, May and Max to him, while he waits for Treecko. The Treecko comes with water, pouring the water to the tree's roots and setting a bush near it. Treecko repeats the process several times again, with Ash and Pikachu watching it doing.

As Treecko places a new bush, he is startled by Ash and Pikachu, who help it in reviving the tree. When they are coming back to pour the water, the trees start shaking; Team Rocket is taking the Treecko away, who were living on the trees. The machine knocks Ash and Pikachu away, while Team Rocket departs in their balloon, with the Treecko. Pikachu uses Thunderbolt, but Team Rocket have an anti-electrical balloon, which absorbs electricity. Ash tries to send Taillow, but remembers sending it off to his friends. In this moment of weakness, Team Rocket steals Pikachu. Treecko climbs and attacks the balloon with a stick, but without effort. James sends his Cacnea out to use Pin Missile, but Treecko dodges. Treecko jumps and pounds Jessie, who accidentally presses a button, releasing the Treecko group. The Treecko group are rescued, while the Treecko taunts Cacnea. Cacnea uses Pin Missile accidentally piercing the balloon. Pikachu and the Treecko land on a tree before Team Rocket's balloon blasts off.

The elderly Treecko then apologizes to the Treecko by waging his tail to the other one. Suddenly, the giant tree splits itself in half, but the Treecko push the tree not to fall down. While Ash tries to search for some rope, the sun rises, and the tree shapes itself anew. It grows the seeds, which fall down, causing new trees to grow out. However, it turns out that the tree split itself and destroyed itself. Ash senses the tree thanked Treecko for spending the last moments with it. The Treecko then tackles Ash and Pikachu, wanting to fight them. Brock, May, Taillow and Max arrive to witness the battle. Pikachu uses Thunderbolt, so Treecko attempts to dodge, but gets hit by one. Pikachu uses Quick Attack, but as the Treecko dodges, Pikachu uses Thunder, defeating the Treecko. Brock explains that when Treecko was in air, the Thunderbolt had much more effect, as usually electricity is absorbed into the ground.

Ash throws the Poké Ball and catches Treecko. Ash sends Treecko, and the elderly one gives him one of the seeds from the tree. The Treecko plants the seed and bids farewell, along with the heroes, the Treecko group. The seed, however, spouted out a new plant. 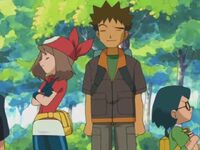 May does not approve of Max 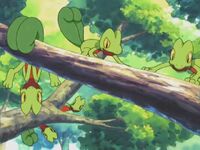 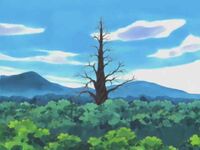 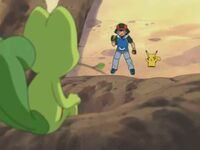 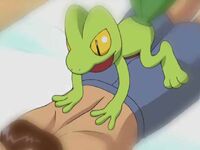 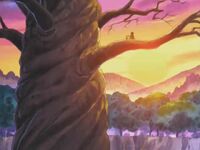 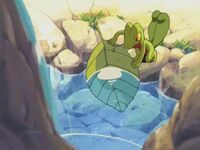 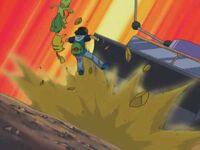 Ash and Pikachu get hit by Team Rocket's machine 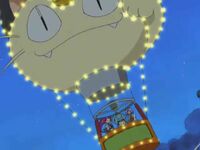 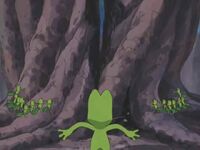 The tree splits in half 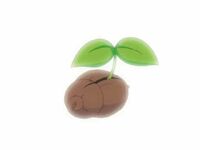 A new plant starts spouting out 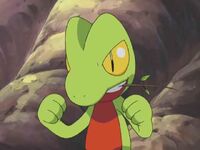 Treecko is ready to battle Ash and Pikachu 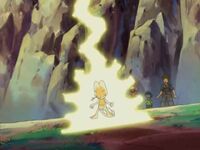 Treecko gets hit by Thunderbolt 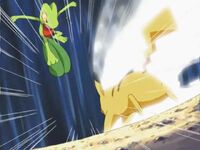 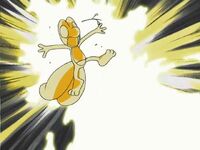 Being in mid-air, Treecko suffers serious damage by Thunder 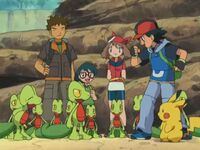 Treecko is ready to depart with Ash
Add a photo to this gallery
Retrieved from "https://pokemon.fandom.com/wiki/RS007:_Tree%27s_a_Crowd?oldid=1289375"
Community content is available under CC-BY-SA unless otherwise noted.