Get the Show on the Road!

Get the Show on the Road!

Ash arrives in the Hoenn region.
Ash meets May.
May receives a Torchic.
May meets the villainous organization, Team Rocket, for the first time.
Ash and May meet Professor Birch.
Ash and May go to Oldale Town.
Get the Show on the Road! (たなる大地！たなる！！ A New Land! A New Adventure!!) is the 1st episode of Pokémon: Advanced.

Finally in Littleroot Town, Ash and Professor Birch discover that Pikachu has an electrical overload. The excess electricity causes Pikachu to run off in pain, followed by Ash and Birch. Soon, a pack of Poochyena appear and chase Professor Birch, interfering with the beginning of a new journey for a young trainer named May, who after all the trouble chooses a Torchic for her first Pokémon.

A young 10-year-old girl, named May, rides her bike to meet Professor Birch, one of her father's friends, to get a starter Pokémon and become a trainer. However, her deeper desire is to see new places and travel around. She encounters a scary Pokémon, throwing her off balance and causing her to crash into a tree. Still, she does not like Pokémon, but loves traveling more. Meanwhile, Ash takes care of Pikachu, as they go to Hoenn. Ash promises he'll get Pikachu to a Pokémon Center to get him healed. Meanwhile, Team Rocket are sailing and Jessie is in trance, wondering about her life. James and Meowth are surprised at Jessie, who claims she has anything changed at their attempts to capture Pikachu. Arriving in Littleroot Town, Ash is told there is no Pokémon Center around. Instead, Ash tries to contact Professor Birch, but his assistant reports Birch is doing field work, though he will try to contact him. Ash looks at Pikachu, who is still suffering. After some time, a car arrives. Professor Birch meets up with Ash and they immediately enter the car.

Birch knows Pikachu must've received too much electricity and is randomly discharging it, since he is unable to release electricity properly. Ash recalls Pikachu was binded to an electro-magnet, so Birch is certain that was the cause of Pikachu's surge. Since they don't have much time, Birch speeds up through the forest, to his lab. His assistant, Joshua, wires Pikachu to a device that absorbs excess electricity. However, the device absorbs too much electricity and explodes, while Pikachu runs off with Ash following soon after. As Ash has no other Pokémon, Birch takes his own. Birch knows even if the Pokémon were meant originally for May to choose, Birch asks Joshua to tell May to wait until the situation is over. Team Rocket observes, while Jessie still sees it is yet another problem. Birch warns Ash that Pikachu may release too much electricity, enough to create an explosion. To have better chances at finding Pikachu, Ash and Birch split from each other. May comes to the lab, so Joshua tells her Birch went away and should wait. However, May rides off, as she finds it hard to be in one place for too long.

Ash desperately searches for Pikachu, but sees nothing. Birch is also searching, but slips off a slope and falls on a Poochyena. Poochyena is angry and howls, summoning two more Poochyena. Birch gets chased by the Poochyena and climbs up onto a tree. May encounters Birch, who asks of her to open the bag and send a Pokémon to battle. May sends a Pokémon, which is a Mudkip. Birch asks of her to order Water Gun. May does so, but Mudkip uses the move on her face. Birch is displeased, but falls down. He calls Mudkip, who uses Water Gun on Poochyena, scaring them off. Birch thanks May and admits May resembles like her own mother, whom Birch has not seen in some time. May wonders what was Birch doing, who replies they must not afford a moment to lose. Ash approaches Pikachu, who does not recognize Ash from all the electricity and uses Thunder. Birch and May see the discharge from Pikachu's Thunder and her Ash's screams, Birch seeing that Pikachu might explode, shocking May. Ash tries to help Pikachu, who runs off. Pikachu falls down a cliff, so Ash jumps to save it. He hangs on a branch with Pikachu, so Birch and May send a rope down. Ash climbs up, though Pikachu is nervous and bites Ash, who promises everything will be fine. Birch and May pull Ash, who asks Pikachu to come to Professor Birch's lab to get healed. Pikachu realizes he bit Ash and licks his wound.

Suddenly, Team Rocket appears. Ash warns Birch and May they are troublemakers. Meowth explains this machine absorbs electricity, no matter how much high the voltage it contains. Team Rocket takes Pikachu and absorbs the electricity from him. However, they are shocked to see how much it is absorbed. Pikachu is healthy again and uses Thunderbolt, which also causes May's bike to be destroyed. The machine explodes on Team Rocket to blast them off, but Jessie is pleased, seeing their purpose to track down Pikachu. After the battle is over, Pikachu falls down, due to exhaustion. At the lab, Joshua reads that Pikachu's electric levels are normal, as Team Rocket's machine did help drain the excess energy. May nearly trips a vase, but gains everyone's attention. May introduces herself to Ash and wonders about Pikachu, so Birch replies a night's sleep should restore its energy. May goes to choose her first Pokémon, pleasing Ash for that.

Birch sends the Grass Pokémon, Treecko. May is scared of it, but Ash thinks it has cute eyes. Birch sends the Water Pokémon, Mudkip. May knows it didn't do what she asked, but Ash doubts that, since it looks cute and loyal. Birch sends the Fire Pokémon, Torchic. Torchic approaches May and is fond of her, so May chooses Torchic. Birch gives her a few Poké Balls and a Pokédex. Birch thinks May could be an even greater trainer than her father, but May is nervous, since she only decided to be a trainer to travel around. Next day, May is frustrated that her bike got destroyed. She walks into the room to argue, but finds Ash and Pikachu asleep. Pikachu wakes up Ash, who is glad to see his friend healthy. May closes the door, pleased to see that the two are doing okay.

May sends Torchic and greets it. Ash walks out and May sees Pikachu is rested. Pikachu joins Torchic and plays with it. May looks at her bike and decides to forget it. Birch and Joshua report Ash can register for the Hoenn League in a Pokémon Center, the nearest being in Oldale Town. May points out that Pikachu destroyed her bike, and traveling around alone sounds unsafe, but proposes to travel together to Oldale Town. Ash agrees, pleasing May about it. Ash and May bid Joshua and Professor Birch farewell, as they start the journey together.

"I guess I should've worn a helmet." - May
(Just after May on her bike crashes into a tree)

"My bike's barbecued!" - May
(Just after it get hit by the discharge from Pikachu's Thunderbolt)

"Uh, that's not a friendly greeting. No, doesn't sound sad either. So that leaves one thing, you're angry!" - Professor Birch
(After two more Poochyena join the Poochyena that Professor Birch almost lands on top of)

"I could give up Pokémon any day of the week just for a trip around the world." - May
(After May under her breath diclaims her displeasure of Pokemon) 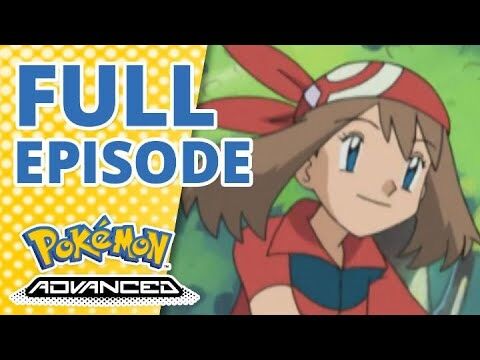 May and Ash are both heading to Littleroot Town

Ash looks at his sick Pikachu

Joshua reports Professor Birch is not present at the lab

Birch drives the car back to the lab

Joshua and Professor Birch realize the machine will explode

Birch startled a Poochyena by accident

Professor Birch is being intimidated

May gets sprayed by Birch's Mudkip

Mudkip manages to hit the Poochyena

Pikachu is confused, his vision blurred

May is startled, as her bike got destroyed

May overheard the conversation

Birch brought out Mudkip, who "helped" May

May notices Ash has kept vigil over Pikachu

May is glad she'll be able to travel around with Ash