Qwilfish resembles a pufferfish. It has a Bluish Greenish top and a pale underside. Noticeable features of Qwilfish are its toxic spikes, its paddle-like tail, and its round shape. Its eyes are straight and serious.

Qwilfish does not evolve.

Qwilfish is based off of a pufferfish. Its Poison-type may be a reference to how some pufferfish have toxins that have no antidote. It may also reference how pufferfish are a common delicacy in Japan, often causing death due to its poisonous gland that is often sold and eaten. 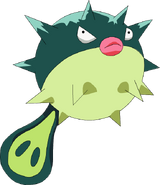 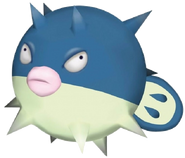 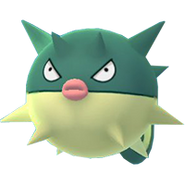