Quilladin (ハリボーグ, Hariboogu) is a Grass-type Pokémon introduced in Generation VI. It is the evolved form of the Grass-type Starter of Kalos, Chespin.

Quilladin is a porcupine-based Pokémon. It has two layers: the above is painted green and the under is dyed brown. On the top of its ears, nose, and tail, the color is orange.

When Chespin evolves into Quilladin, the hard spikes on its body grow even sturdier.

Despite its prickly appearance, Quilladin is considered a gentle Pokémon that avoids battle. Quilladin uses its sturdy shell to repel attacks and strike back with its pointed spines.They never start conflicts with other Pokémon, even when resources are scarce. These Pokémon would rather starve than take food from another hungry creature.

Quilladin live in small groups of about six or so individuals. Members of a group tend to be very close to one another. In their spare time, Quilladin will run into one another at high speeds in order to strengthen their lower bodies. Groups of Quilladin have been known to work together in order to defend smaller and weaker Pokémon from predators by surrounding them to create tough walls of quills.

Quilladin shells are made of hard wood that can deflect the attacks of most enemies; their carapaces and sharp spines successfully deter most predators from even attempting to harm them.

Quilladin may be based on a hedgehog. It may also be based on an armadillo or pangolin due to its more round shape, as both animals mentioned are known to roll up to protect themselves. Its shell may be based on chestnuts or possibly a knight's armor, as evidenced by part of its name possibly originating from "paladin".

Quilladin comes from quill and paladin (a type of knight). It may also incorporate pangolin. 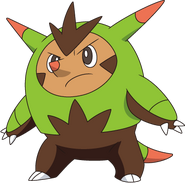 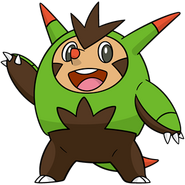 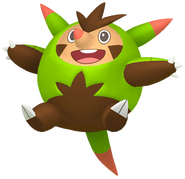 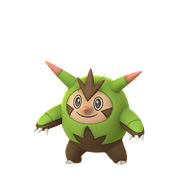