Queen of the Mirage Kingdom

Queen of the Mirage Kingdom

Name
Queen of the Mirage Kingdom

The Queen of the Mirage Kingdom is a character appearing in Pokémon the Series: Ruby and Sapphire.

The Queen, along with her husband, the King, and her daughter, Princess Sara, were the current rulers of the Mirage Kingdom some time after the King found the Togepi destined to allow him to claim the throne. The Queen, upon learning that her daughter had found a Togepi, thus enabling her to succeed her as Queen of the Mirage Kingdom in the future, joined her daughter in her bedroom, while Sara's guardian, Miranda, went to tell the King of what happened. The King soon joined them and was overjoyed to see his daughter would now be able to become Queen after he stepped down, but the happy moment for the royal family was interrupted by the arrival of Ash Ketchum and his friends, as the Togepi that Sara found actually belonged to Indigo Pokémon League Gym Leader Misty of Cerulean City in Kanto. Once the misunderstanding was cleared up, the Queen returned to the throne room.

Later, she and her husband were shocked and furious when Colonel Hansen arrived with guards loyal to him to overthrow them in an attempted coup d'état to claim the Mirage Kingdom throne for himself so he could then take over the Togepi Paradise. The two of them were locked up for some time before being found and rescued by Miranda, and Ash's friends, Indigo Pokémon League Pewter City Gym Leader Brock, and son of Hoenn Pokémon League Petalburg City Gym Leader Norman, Max, who had been tipped off to their whereabouts by Hansen's former allies, Team Rocket, who wanted revenge for being betrayed by Hansen. Following after Hansen was defeated with his Shedinja scorched by Misty's Gyarados, the Queen and her husband arrived with the royal guards to have Hansen arrested for his treason and sent to either serve life in prison, or be executed. It was presumed afterwards, when the Queen learned that Sara found her Togepi to allow her to claim the throne, that she was very proud of her, and when the King was no longer able to rule, Sara ascended to become Queen in her stead. 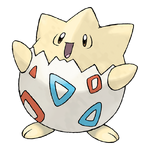