Pyukumuku is a marine Pokémon with an ovoid, black body. Its face has two beady, pink eyes and a white mouth shaped roughly like a star or Daimonji. Two lines of three pink spikes run down each side of its back. The middle spike of each line is about twice as long as the others are. A fluffy white puff forms its tail.

Pyukumuku hate when their spikes and mouth are touched, and they will spit out their organs when someone steps on them. If stepped on, one will expel its fist-like organs and smack the perpetrator. Pyukumuku tend to find a spot they like and stay there, even returning to the same spot if moved. Once all the food in their favorite spot has been consumed, they will continue to stay there to the point of starvation. These stalwart creatures will not budge once they find a favored spot; they would first starve or dehydrate before moving.

They are covered in viscous mucus that can keep them moist for a week on land. It can also be used as a moisturizer and sunburn treatment. When they wish to return to the sea, they may hitch a ride with Pokémon like Pelipper.

A Pyukumuku is capable of spitting its organs out through its mouth. The white organs can take different shapes, such as a fist. Their bodies are coated with a viscous fluid that allows them to stay on land for a week without drying out. This fluid is also beneficial to people as a moisturizer.

Pyukumuku is based on a sea cucumber. Its round shape, pink protrusions, and its fluffy tail may make it based on a sea bunny, a type of sea slug that sports rhinophores resembling rabbit ears.

Its Shiny coloration may be based on normal cucumbers.

Pyukumuku is likely a combination of puke, cucumber, and mucus. 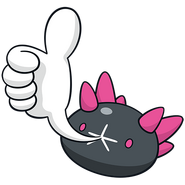 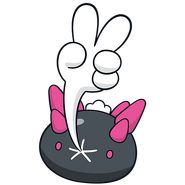