Pyroar is a distinctly lion-like Pokémon. It has a tan-colored face, a blunt leonine muzzle, intense blue eyes, a black triangular nose, and rounded ears. Its large, powerful body is covered in brown and tan-colored fur. It has bulky tan-colored paws and feet with three visible toes on each; when angered or attacking, Pyroar unsheathes its sharp retractable claws. The male Pyroar has a magnificent bushy mane of blazing red and yellow flames encircling his head. The female Pyroar lacks the mane, and instead has a long tuft of red and yellow flaming fur atop her head. Pyroar's fiery mane is very hot to the touch, and glows brightly when it attacks. It has a long, slender brown tail with a bushy tan-colored tip. The male Pyroar's ears are concealed by its large mane, but the female's ears can be seen.

Pyroar are fierce and aggressive Pokémon in the wild. The leader of a pride of Pyroar is always the male with the largest mane of fire. Female Pyroar protect the pride's Litleo cubs. Pyroar are capable of breathing flames of more than 10,000 degrees Fahrenheit, and will viciously threaten any opponent.

Male Pyroars are typically lazy, but will fiercely defend their allies from stronger foes. When hunting for food, Pyroar prefer to eat its prey raw rather than cooking it with a flame breath.

Pyroar can be evolved from Litleo at level 35.

Pyroar is based on a lion. The yellow marks on the male's mane resemble a Daimonji (大), a fire lit during Japanese festivals or it could resemble a Kanji for fire (火). Its gender ratio of one male to seven females is based on lion prides, which are usually made up of one male and multiple females.

Pyroar comes from pyro (Greek for "fire") and roar (the sound big cats (such as lions) make). 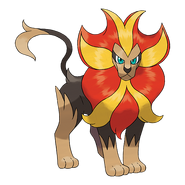 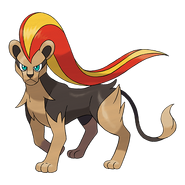 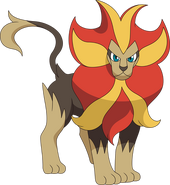 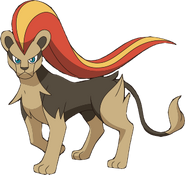 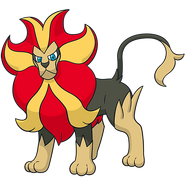 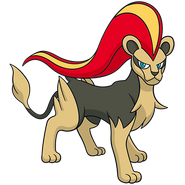 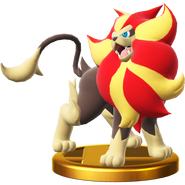 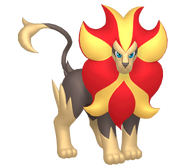 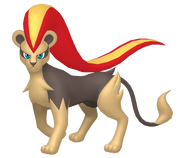 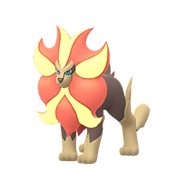 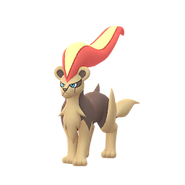