Pyramid King Brandon is the sixth Frontier Brain. He is in charge of the Battle Pyramid.

Brandon is tall and medium build. He has thick brown hair that hangs around his face, with a thick, long side fringe, small dark eyes with thick dark, prominent eyebrows and slightly tanned skin. He wears a cider green coloured jacket fastened with big white buttons and has a red collar, matching cropped trousers, white socks and charcoal coloured flat shoes. He also wears a black belt with a grey pack on his side.

Brandon is an adventurous person that has stated that he appreciates the life of an explorer. Before a battle he talks to people about touching matters and difficult questions to boost his courage. During conversation, Brandon likes to use long, somewhat complex words.

The player character gets to challenge Pyramid King Brandon after they completed the Battle Pyramid in the Hoenn's Battle Frontier. 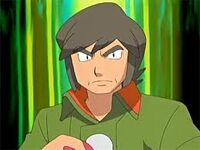 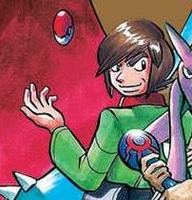