Pumpkaboo is a ghostly Pokémon that resembles a pumpkin carved into a jack-o-lantern. The top part of its plump, round pumpkin-like body is covered in a thick shag of dark brown hair that curls upward slightly at the ends. It has a curled stem at the top of its head, and two horn-shaped tufts of hair on either side. It has two ovular yellow eyes and a small mouth with two sharp fangs protruding from beneath its upper lip. The bottom part of Pumpkaboo's body is orange and pudgy, with two short legs and two holes that seem to have been carved out. Inside Pumpkaboo's body, a mysterious orange light can be seen and can act as a flashlight.

Pumpkaboo come in various sizes, ranging from small to super-size. The size of a Pumpkaboo determines its stats.

Pumpkaboo are crepuscular, specifically vespertine, Pokémon that also remain active throughout the night. They are most restless, however, just as the sun sets and twilight arrives. When daylight approaches, Pumpkaboo settle down, rest, and wait for the sun to set again. They sleep, like pumpkins, on the dirt in fields and rural areas.

Pumpkaboo carry souls inside of their hollow bodies. Smaller Pumpkaboo are made up of fewer souls but larger Pumpkaboo are made up of more souls. In addition, smaller Pumpkaboo prefer children while larger Pumpkaboo prefer adults. Pumpkaboo are thought to act as psychopomps, leading recently deceased souls to places where they can move on. The Pokémon Dusknoir are believed to pick these spirits up here to ferry them into the world of the dead while Pumpkaboo remain behind. The lights on these Pokémon's bodies are thought to show lost spirits the path to the spirit world; for this reason, living travelers who encounter these lights try to avoid them whenever possible.

Pumpkaboo evolves into Gourgeist when traded.

Jessie caught a Pumpkaboo in The Bamboozling Forest!

Pumpkaboo is based on a pumpkin, taking inspiration from jack-o'-lanterns, pumpkins carved with patterns usually set out on the time of Halloween. Its signature move Trick-or-Treat also furthers this Halloween inspiration. Its four different sizes originate from how pumpkins often come in many different sizes. Its fur could possibly take inspiration from bats, an animal often associated with Halloween, shown by its small eyes, fangs, and its fur spreading out to slightly resemble wings. The tuft of fur atop it also resembles the stem of a pumpkin.

Pumpkaboo comes from pumpkin and boo (a word sometimes shouted to scare people). It also could be referencing peek-a-boo, a game used to entertain infants and young children. 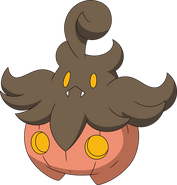 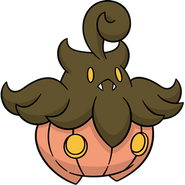 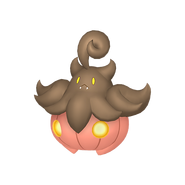 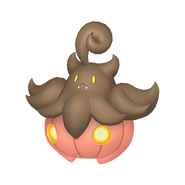 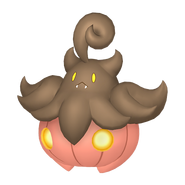 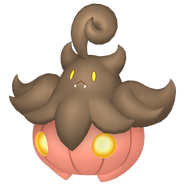 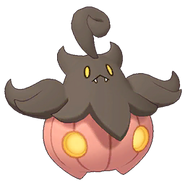