This Pikachu (nicknamed Puka) is an Electric-type Pokémon owned by Victor. He is voiced by Chika Sakamoto in both the original Japanese and English-language versions of the Pokémon anime.

Some twenty years prior to the episode, Puka was seen floating to Seafoam Island on a single wooden board when he was found by Victor, Instantly became his main Pokémon while also reigniting Victor's passion for surfing. For the next twenty years, Puka and Victor lived together side-by-side, conquering each wave.

After meeting Ash Ketchum and his friends, Puka used his powers to sense the wave, helping Victor ride the Humunga Dunga, a huge wave that only one surfer, Jan successfully conquered.

None of Puka's moves are known. 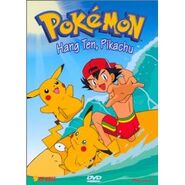 Puka (Pikachu with blue eyes) is seen upon the surfboard on the front of the VHS featuring The Pi-Kahuna.
Add a photo to this gallery

Cite error: <ref> tags exist, but no <references/> tag was found
Retrieved from "https://pokemon.fandom.com/wiki/Puka?oldid=932371"
Community content is available under CC-BY-SA unless otherwise noted.