Proton is one of the executives of Team Rocket. Originally, in Gold, Silver, and Crystal, he was two people—a nameless Grunt in the Slowpoke Well, and a nameless Executive in the Goldenrod Radio Tower. In HeartGold and SoulSilver, he was given his own character and took on the roles of both Grunt and Executive.

Proton has teal hair and similarly colored eyes. His uniform consists of an open-collared black shirt with yellow stripes and the Rocket logo, black pants, a white belt, white gloves and boots with a single red stripe near the top, and a black flat cap akin to the ones Rocket Grunts wear.

Proton is known as the "scariest and cruelest guy in Team Rocket", and is quick to anger. He shows no remorse in cutting off the tails of Slowpoke down in the Slowpoke Well, and is frustrated when he is beaten by the player and is forced to retreat. He is also cocky, bragging about Rocket's efforts and advising the player not to interfere with their work, lest they face the wrath of the organization. Despite his traits, he's one of the most popular executives; a Rocket Grunt in the Goldenrod Radio Tower, when spoken to, admits her admiration for him.

He is the third in command of the Team Rocket executives. He is one of the members of Team Rocket in Johto. His father is unknown like some of the other Team Rocket members. He does not appear in person often but is good at getting new agents/grunts. He has teal hair and mostly relates to the champion Lance. He enjoys giving orders to other members.

In the games, you first battle him at the Slowpoke Well when Team Rocket is cutting off the tails of Slowpoke to make money. You meet him a second time in the Goldenrod Radio Tower. 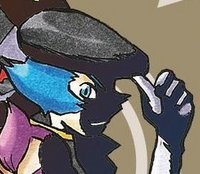