Professor Westwood V is a character appearing in Pokémon: Indigo League. He is known for his work on the Pokédex entries.

Oak told Ash to ask Westwood about Slowpoke evolving into Slowbro as both Professors were coincidentally working on the same mystery. Westwood invited Ash, Brock and Misty into his home and lectured them about his current analysis about Slowpoke's evolution. Jessie's Shellder (temporary) bit onto Westwood's Slowpoke causing it to evolve into Slowbro and leave Jessie, therefore solving the evolution mystery. 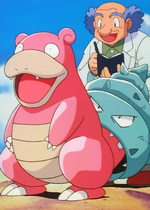