For the variant appearing in the games, see Professor Rowan.

Professor Rowan is a character appearing in Pokémon Adventures, who is a professor and researcher.

Professor Rowan wears a brown coat, tie and shoes. He has white hair and a white mustache. He has dark brown pants. Under his coat, he wears a blue suit with yellow bottons on it. He carries a brownish orange suitcase.

The last name Rowan could possibly originate from the "rowan" tree.

Some time ago, Mr. Berlitz and his daughter helped Professor Rowan in his studies.[3] Two months before Platinum's journey, Professor Rowan asked of the Pokétch president to make three Pokétches. The president was glad for the work order, while Rowan asked of him to make them differently colored, for three people that would start off the journey. The president thought of making a pink, a blue and an orange Pokétch, which made Rowan see he would have to make the Pokédexes match their color.[4] Oak and Rowan worked together to create the newest Pokédex, which would be given to Sinnoh Pokédex Holders.[5][6]

Professor Rowan went with Mr. Berlitz to meet up with the bodyguards, which were hired to keep Mr. Berlitz' daughter safe. However, Diamond and Pearl accidentally bumped into them, which made Rowan angry that the youth had no manners nowadays. Diamond and Pearl apologized and ran off, while Rowan and Mr. Berlitz stood up. The former commented the size of the crowd in the place, considering he recently came from Johto region. Mr. Berlitz explained that the stand-up competition was held, and considered themselves lucky to be like that, since his daughter could go around unnoticed. Rowan admitted he was surprised that Mr. Berlitz let his daughter roam around freely, considering she was a member of the noble family of scholars. While he understood it was tradition for the Berlitz family to go to Mt. Coronet to craft a family emblem, he still thought Mr. Berlitz' daughter was too young. Mr. Berlitz added that she had insisted on doing so, but was grateful that his daughter was convinced to at least take some bodyguards, and Rowan was also glad that she decided to record the Pokémon in the Pokédex along the way. A moment later, they met the two bodyguards, who were given the envelope with the mission. The bodyguards disappeared, which made Rowan and Mr. Berlitz convinced the two were professionals.[3] Diamond later thought about the encounter with Mr. Berlitz and Professor Rowan, and realized they accidentally swapped papers, so they ended up traveling with Platinum, whom Pearl thought of as a tour guide for their travel.[7]

After having an interview at the Jubilife TV, Rowan returned to his lab in Oreburgh City. There, Mr. Berlitz has awaited his coming, and prepared data about gender differences, and differences between Pokémon from Eastern and Western Sinnoh region. Rowan noted he was fast at preparing that, and looked at the papers about Pokémon evolution, which was another thing they had to study through.[8] Rowan finished his research, and had a lunch break with Mr. Berlitz. He asked Berlitz where his daughter could be. Mr. Berlitz did not know, but he didn't feel upset, as he believed that girls her age were interested in various things and visit various places. It was why he had the bodyguards arranged to permit Platinum to do stuff as long as it wasn't too dangerous. Rowan noted that was a smart move to do, and the two guys packed up to visit Canalave City.[9] Professor Rowan and Mr. Berlitz went on a boat, pushed by a Floatzel. The two were eager for the conference that was held in the library. Rowan reminded there were many Pokémon experts there that would share their knowledge, over the next two weeks, and Mr. Berlitz confirmed that.[10]

Professor Rowan and Mr. Berlitz were trapped in a cage in Byron's Gym.[15] Despite being trapped, Professor Rowan and Mr. Berlitz were pleased to see Platinum alive and well, but wondered who were the boys she was traveling with, since they were not the bodyguards they had hired.[14] The Team Galactic grunt came to Canalave City Gym, where he, from a distance, released Professor Rowan and Mr. Berlitz, since he didn't want them to suffer, considering their objective to get the funding was completed. Diamond and Pearl explained to the two gentlemen what happened to them and Platinum. The next day, as they were waiting for Platinum, Diamond and Pearl apologized to Rowan and Mr. Berlitz for the trouble they caused. The group was waiting for Platinum, as Mr. Berlitz and Professor Rowan felt it was for the best for her to go back to the mansion, rather than to have a journey in these dangerous times, without bodyguards to protect her. Suddenly, Platinum arrived, and explained while she respected everyone's opinions, she announced that she would defend Sinnoh region, for Team Galactic would use the Galactic Bomb to blow up the lakes.[16]

Rowan and Mr. Berlitz went with Byron through the underground tunnels. While they thought that they were hindering the Gym Leaders, Byron reminded they were fighting, while Rowan and Mr. Berlitz were to share their knowledge of the Legendary Pokémon Dialga and Palkia. While Mr. Berlitz was observing the changes in the magnetic field, Rowan suspected there was one way to defeat the enemy. Since Mr. Berlitz noticed abnormalities, Rowan reminded of a clash between Kyogre and Groudon, which were led by their instincts. However, he noticed that Dialga and Palkia weren't normally enemies, and realized that Cyrus was forcing them to fight. Since space itself was being warped, preventing the Gym Leaders from reaching Cyrus, Rowan had Byron get all the Gym Leaders to the tunnels. Rowan explained they just experienced a warp in space and time, and told there was one way to defeat the enemy. The Gym Leaders emerged through the ground to Cyrus, and destroyed the Red Chain. Mr. Berlitz and Rowan cheered for the victory, but the latter gasped, and asked Mr. Berlitz if the calculations were correct. In fact, the space and time warp reached the tunnels, and affected Mr. Berlitz.[20]

As Charon, Team Galactic's scientist, tried to escape, he was stopped by Byron, the Underground Man, Mr. Berlitz and Professor Rowan. Rowan and Mr. Berlitz heard Charon muttering about some data, and wanted to interrogate him for that. Byron took his device and fiddled with it, causing gigantic tentacles to emerge and pull Dialga, Palkia and Cyrus through the hole, while Charon escaped, leaving a notebook behind.[21] Once the battle was over, Rowan passed Charon's notebook, a memo about the Legendary Pokémon, to the Sinnoh Pokémon Association's chairman.[22] Professor Rowan spoke with Diamond and Pearl on the matter. Diamond admitted they already encountered a Legendary Pokémon, Rotom, and claimed they could easily face it once more, much to Pearl's surprise.[23]

Professor Rowan and Mr. Berlitz went to Sunyshore City, where they encountered Diamond, Pearl and Platinum. They saw a robot figure punching Charon to the ground, which was actually possessed by a Rotom. It reminded Rowan of an article that said a Pokémon possessed a robot to be playing around, and assumed it referred to Rotom. With the conflict over, Mr. Berlitz and Rowan noted there were many Pokémon that could change forme, to which they would write articles about. In the end, Rowan continued his research with the Berlitz family and Roseanne, though he did take some candy in secret.[24]

Professor Rowan called Professor Oak, and warned him of the awakening of Xerneas and Yveltal in Kalos.[25] 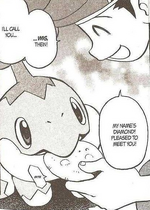 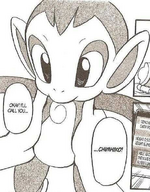 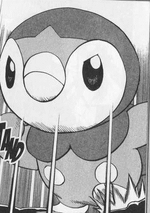