Professor Rowan is a character who first appeared in the Generation IV games Pokémon Diamond and Pearl and is also known as the leading Professor of the Sinnoh region.

Professor Rowan wears a brown coat, tie and shoes. He has white hair and a white mustache. He has dark brown pants. Under his coat, he wears a blue suit with yellow bottons on it. He carries a brownish orange suitcase.

He appears to have a serious demeanor, compared to previous Professors' kind and cheery attitudes.

The last name Rowan could possibly originate from the "rowan" tree.

As the lead manager of his laboratory, like Professor Oak, Professor Rowan is given the task of introducing the player throughout the beginning of the game as well as helping his assistant, Dawn or Lucas, choose which Pokémon to start with. Professor Rowan can be found in Sandgem Town researching and collecting data on various Pokémon. He also upgrades the player's Pokédex to National Mode when they have seen 150 Sinnoh Pokémon.

Prior to Pokémon X and Y, Professor Rowan taught Professor Sycamore much about Pokémon Evolution when he was young. 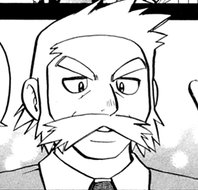 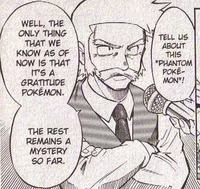 Starting Sprite with Munchlax from Pokémon Diamond and Pearl