Professor Oak is a middle aged Pokémon professor with gray hair and sports a light lilac polo shirt underneath his labcoat. He wears a brown belt supporting his beige pants along with matching brown loafers.

The last name Oak could possibly originate from the "oak" tree.

In Red and Blue, Green, Professor Oak lives in Pallet Town and he is absent from his lab until you try to leave town, when he runs up to you and makes you come with him. He then lets you choose a Starter Pokémon. If you go to the mart, the store clerk will give you Oak's Parcel. The Parcel contains a prototype Poké Ball, bring it back to Oak and he will give a Pokédex to you along with 5 Poké Balls. He sends you on your journey and all throughout he helps you by sending his aides out to give you items if you capture the right amount of Pokémon. In Pokémon FireRed and LeafGreen, he helps you when your rival challenges you for the first time.

In Yellow, when the player steps into the grass they will encounter a Pikachu, which Oak captures and gives to you after your rival takes the Eevee that was intended for the player.

In FireRed and Leafgreen, his role is similar to that of its originals.

In Diamond and Pearl, after you see each Pokémon in your Sinnoh Pokédex, Professor Oak will come and hand you the National Pokédex. He resides in the most southerly house in Eterna.

In HeartGold and SoulSilver, after beating the Elite 4 for the first time you will be able to receive the National Dex from him. Also after defeating all of the Johto and Kanto gym leaders he will give the trainer the HM08 Rockclimb.

In Let's Go, Pikachu! and Let's Go, Eevee!, his role is similar to that of its original. 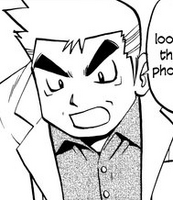 Professor Oak in the Base Set (TCG)