Professor Kukui is the regional Pokémon professor of the Generation VII games, Sun and Moon and Ultra Sun and Ultra Moon, situated in the Alola region. He studies Pokémon moves, and is married to Professor Burnet.

Professor Kukui is a young man with a muscular physique, who has dark eyes, black hair, a black man bun and a goatee. He wears a white hat with a rainbow decoration in the front. Professor Kukui also wears glasses with a teal frame, a white lab coat with rolled-up sleeves, gray baggy pants with a teal stripe and white drawstrings and some teal shoes with a white outline. Professor Kukui has a silver ring on his ring finger.

As Masked Royal, Professor Kukui wears a wrestling outfit: black wrestling tights with a white trim which has three Poké Ball designs on each sides and white knee-high wrestling boots. He also wears a brown elbowband on his right elbow and two matching black wristbands with a white trim on his wrists. To complete the outfit, he wears a red flame designed wrestling mask with green and light blue coloring with blue designs at the back of his mask. Later, he wears a Z-Ring on his left arm.

Most of the time, Kukui is a helpful and friendly person. He likes to call the player character as "cousin". He often helps them throughout their adventure; however, he seems to be silly or out of his mind sometimes, such as when he takes attacks from a Rockruff in the beginning of the game.

He has a "secret" identity where he is known as the "Masked Royal," a pro wrestler. However, when confronted, he always tries to deny it.

The last name Kukui could possibly originate from the "kukui" nut tree, the national tree of Hawaii.

Before coming to Alola, Kukui had a journey through Kanto, where he fought against the Gym Leaders. It is revealed that Elio/Selene's mother used to watch Kukui's battles. Though it was a hard challenge, Kukui managed to participate in the Pokémon League and went all the way up to face "the dragon user in the cape". This made him motivated enough to construct Alola's Pokémon League and invite strong Trainers to form the Elite Four. He was also appointed to be a Trial Captain, but he refused to become one. Guzma suggests he is a failure and a misfit just like him.

Once the Pokémon League in the Alola region is opened, Kukui is the final Trainer the player character will face. Though not officially the Champion, Kukui is nevertheless a powerful Trainer. 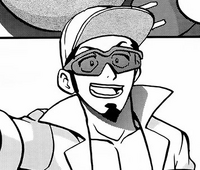 Professor Kukui in the Anime. 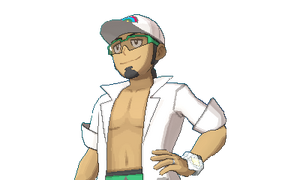