For the variant appearing in the games, see Professor Juniper.

Professor Aurea Juniper is a character appearing in the Black & White series, who is a professor and researcher.

This section, or a part of it, has been transcluded from Professor Juniper; any changes involving it should be made there instead. /

Professor Juniper is a lithe woman with fair skin, green eyes, and poofy honey-colored hair. She wears a pale greenish-blue lab coat and a white blouse, along with a short green skirt and athletic white shoes with red stripes. She also has red rectangular earrings in both of her ears.

The last name Juniper could possibly originate from the "juniper" tree.

Her Japanese surname, Araragi, comes from アララギ (araragi, the Japanese name of the spreading yew).

At a port close to Nuvema Town, Professor Juniper greeted her colleague, Professor Oak, as well as Ash and his mother, Delia, who traveled to Unova with Professor Oak as well. Juniper took them all in a car to her lab, expressing she has many questions about Kanto's Pokémon, which are rarely seen in the Unova region. After scanning Ash's Pikachu, Professor Juniper was approached by her assistant, who pointed out a new trainer came to choose his starter Pokémon. Professor Juniper and Ash came into the lobby, greeting Trip. Professor Juniper presented Oshawott, Tepig, and Snivy, of which Trip chose Snivy as his partner. With this done, Professor Juniper equipped Trip with five Poké Balls and a Pokédex. After Ash had his battle with Trip, Ash presented Pikachu to Professor Juniper, who scanned Pikachu and saw he was overloaded by electricity, since he got struck by a lightning bolt. A thundercloud hovered over Nuvema Town, making Juniper afraid, since Zekrom, the Legendary Pokémon of Unova, had come. In response, Pikachu started emitting electricity.[1] Oak and Juniper tried to cure Pikachu, but failed. Ash held Pikachu, who electrocuted him in the rage. After the thunderclouds cleared, Pikachu was cured of his overload, relieving Professor Juniper. During the dinner, Ash expressed his desire of adventuring throughout Unova. Delia and Professor Oak approved of his wish, so Juniper, like with Trip, equipped Ash with Poké Balls and a Pokédex. Ash bid Professor Oak, his mother and Juniper farewell, who wished him luck in his journey.[2]

The following day, Ash and Iris encountered an Oshawott and suspected it was Professor Juniper's, since Oshawott really liked Ash to follow him far away from the lab. They contacted Professor Juniper, who allowed Ash to keep Oshawott, sending Oshawott's Poké Ball as well.[3] Since she forgot to give Ash a Badge Case, Professor Juniper asked Bianca to find Ash and give him the item. Bianca did so and showed on her Xtransciver Professor Juniper, who greeted the heroes, confirming Bianca's words.[4] After capturing Sewaddle, Ash reported to the Professor. Juniper was pleased and gave him Pidove back for his Sewaddle.[5]

Juniper heard about the Venipede invasion in Castelia City and conducted a research, wondering why would the Venipede be startled like that to come in the city. Her assistants managed to find out a presence in Desert Resort, so Juniper deduced something must've scared the Venipede, who usually lived there. Managing to continue the research, Juniper found out two major energy sources, which were merging. Professor Juniper took a plane to Castelia City, praising the heroes, who managed to calm down Venipede and take them to the central park. To find more, Professor Juniper, along with the heroes, flew off to the Desert Resort.[6]

Professor Juniper worked with Fennel and met up with the heroes in a laboratory. Juniper explained the fossil they were about to revive was Archen's fossil, one of the oldest Pokémon of Unova region. Fennel, using Musharna's dream energy, triggered the machine, causing Archen to be revived, as Professor Juniper documented this with her camera. Despite Archen's docile and wild nature, Juniper was surprised to see Archen, despite being the ancestor of all flying-type Pokémon, could not fly, so decided to extend her research by studying its voice. Juniper took a break, seeing Ash was an amazing trainer, wanting to help Archen to fly by training it. Suddenly, Fennel warned them about the overgrown plants, which destroyed the lab. Professor Juniper was shocked, and even more so to see Archen was eating the fruit from the plants, which even replenished itself by Archen's voice. Juniper suspected the plant's seeds must've been inside the fossil, along with Archen, seeing this would be Archen's new home. Team Rocket appeared and tried to capture Archen, who evolved into Archeops. During the commotion, James' Yamask set the plant ablaze, while James, Jessie and Meowth flew off. While the heroes managed to douse the flame, Archeops' nest had been ruined. Just then, Juniper saw a flock of other Archeops, realizing there must've been another place where Archeops lived in peace and isolation. Everyone bid Archeops farewell, as it flew off with its new family.[7]

Juniper sent her Karrablast, to fulfill Bianca's wish have a battle with her Shelmet before the trade. Karrablast attacked Shelmet, who was too frightened and protected itself, instead. The researchers reported a malfunction in Chargestone Cave, making Bianca worried, as the trade could not be executed. After calming down a Klingklang (and pulling a pen, which caused Klingklang's gears to be stuck), Juniper approached Bianca to the trade machine. There, the two ladies traded their Pokémon and sent them out, causing Juniper's Shelmet to evolve into an Accelgor and Bianca's Karrablast to evolve into Escavalier. However, Escavalier became furious and started attacking, so Bianca called it into her Poké Ball. Seeing Escavalier had excess energy and an aggressive personality, Professor Juniper suggested a Tag Battle, siding with Bianca against Ash and Cilan, who also agreed to the proposal. Ash sent Boldore and Cilan Crustle, who began the battle. Escavalier continued disobeying Bianca and attacked Crustle and Boldore with Fury Attack. To protect Escavalier from Boldore's Rock Blast, Juniper's Accelgor used Substitute, which drained some of its health. Escavalier began obeying Bianca, using Iron Defense to protect itself from Crustle's Rock Slide. Using speed to their advantage, Bianca's Escavalier and Juniper's Accelgor launched Hyper Beam, defeating Ash's Boldore in an instant. To "avenge" Boldore, Cilan's Crustle used Shell Smash and X-Scissor combo, defeating Accelgor and Escavalier in an instant. Bianca was sad they lost, but was happy to know Escavalier started obeying her. Bianca called Escavalier back and bid farewell to her friends. Just then, an old man, who passed out. Juniper was in shock, as the old man was her father.[10]

Seeing her father injured, Professor Juniper tended to her father, who soon recovered. Professor Juniper introduced her father, Cedric, to the heroes, pointing out he is a researcher on Legendary Pokémon. Cedric explained he found some mysterious ruins, which could hold information about Zekrom. Juniper gave Cedric the pen he dropped, who, after some thinking, decided to let the heroes accompany him to the ruins. The heroes and Cedric bid Professor Juniper farewell, as they moved onwards.[11]

The Sunglasses Krororok remembered Professor Juniper, who was with the heroes and Bianca at Chargestone Cave. While the group admired the Joltik and Galvantula inside the cave, Krokorok found a pen and threw it away, which got stuck inside Klinklang's gears.[12]

In Mistralton City's Wishing Bell Festival, Iris saw she had to cosplay like Professor Juniper and thought of her.[13]

With the Unova League over, Ash, along with Iris and Cilan, went back to Professor Juniper's lab. After relaxing a bit, they met up with Nanette, the nervous girl, whom they encountered earlier. Professor Juniper sent her starter Pokémon for Nanette to choose from. Nanette was too cautious, thinking she'd have to work for Juniper for a long time to get her starter Pokémon. Per Cilan's advice, Nanette chose Tepig, who was a lively Pokémon. After giving Nanette five Poké Balls, Juniper approved of the heroes' proposal to have a battle with Nanette, since she could learn much from it. Once Nanette spent the day at the lab, she bid farewell to the heroes and Professor Juniper. Professor Juniper received a call from her father, who managed to find the White Ruins, which are located close to Icirrus City. The heroes decided to go to the Ruins. Juniper approved of the idea and suggested going through Aspertia City, where a new Gym Leader, called Cheren, was located. The heroes bid Juniper farewell, who had to stay at the lab and do some work on her own.[16] 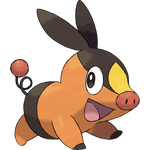