Professor Juniper in other languages

Professor Aurea Juniper is the regional Pokémon professor of Pokémon Black and White, situated in the Unova region.

Professor Juniper is a lithe woman with fair skin, green eyes, and poofy honey-colored hair. She wears a pale greenish-blue lab coat and a white blouse, along with a short green skirt and athletic white shoes with red stripes. She also has red rectangular earrings in both of her ears.

The last name Juniper could possibly originate from the "juniper" tree.

Her Japanese surname, Araragi, comes from アララギ (araragi, the Japanese name of the spreading yew).

Right at the start of the game, you see her enter and quickly exit a house then you see you and your friends standing in front of a green box, you open it and find three Starter Pokémon and, as in all the other games, you choose first. Your male rival Cheren chooses the Starter with the type advantage over yours, while Bianca chooses the remaining Starter. When you have chosen your Pokémon, she demonstrates the method of simple battling and catching a wild Pokémon. She uses a Minccino to battle and she catches a Patrat, which can be seen in her lab. 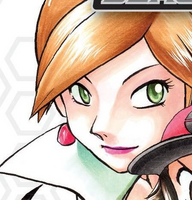 Introduction Sprite in Black and White

Xtransceiver Sprite in Black 2 and White 2