Professor Elm is the renowned Pokémon Professor of Johto. He lives in New Bark Town with his wife and son in a house south of his laboratory (the second floor of his lab in Pokémon HeartGold and SoulSilver). Professor Elm lets you choose a Chikorita, Cyndaquil, or a Totodile as a starter Pokémon. He initially discovered that Pokémon can lay eggs. He is considered the best professor when it comes to researching Pokémon evolution.

Professor Elm is a middle-aged man with short brown hair and gray eyes. He wears a pair of glasses, as well as a white lab coat with two pockets and a collared teal shirt. Professor Elm also wears brown pants with a black belt and brown shoes.

He also wears a light blue collared shirt, with two stripes: the upper one is dark green and the lower one is white.

Professor Elm's appearance remains the same as it is in Gold and Silver.

He wears a teal collared shirt, but with no stripes. Also, Elm wears a dark brown belt around his waist.

The last name Elm could possibly originate from the "elm" tree.

His Japanese surname, Utsugi, comes from ウツギ (utsugi, the Japanese name for the Deutzia genus of flowering plants).

He is the Professor of the Johto region, and is described as "a little scatter brained and disorganized" by his wife. In Platinum, a hiker in Hearthome City that in Diamond and Pearl previously gave you an egg containing Happiny, mentions him and Elm being great friends.

He is the featured professor in the Generation II games (Gold, Silver, and Crystal) and their Generation IV remakes (HeartGold and Soul Silver). 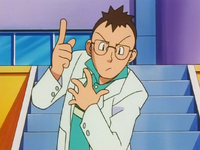