Name
サクラギのワンパチ
Dr. Sakuragi no Wanpachi
(Dr. Sakuragi's Wanpachi)
Notes
Depending on the context, "の" may be the possessive, unless it is used in the name of a character, Pokémon, or fossil.

This Yamper is an electric-type Pokémon owned by Professor Cerise, but has more of a strong bond to Chloe.

Yamper is friendly, as he befriends Pikachu whom he met at first sight. However, he can be bashful and defensive, and won't be nice to those it considers as strangers or threats.

Yamper also has a strong affection to Chloe, and loves her the most despite her somewhat aloof attitude. According to Parker, Yamper will not accept any food unless it comes from Chloe.

Yamper also hates receiving affection from those who aren't Chloe as shown when he electrocuted Ash in "Legend? Go! Friends? Go!", which ruined his overall impression of him.

It is also worth noting that Yamper gets jealous easily, as shown in "There's a New Kid in Town!" when a Trainer's Pidove was being fond of Chloe.

Yamper loves Chloe very much and would do anything to keep her safe from danger. Also, Yamper won't accept food from anyone but Chloe, and won't sleep unless he is in the same room with her. In addition, Yamper would't take commands from battle unless Chloe is the one giving it. Yamper waits for Chloe to come back whenever she goes to school and would be very excited when she does. In addition, Yamper usually goes to Chloe for help whenever he needed it.

Yamper wasn't trustful towards Eevee at first, but seeing that she was just playing was when they easily became friends. Seeing two researchers with a net, Yamper mistook them for hunters that might hurt Eevee as he tried to protect her. After working together with her to save the other Pokémon from Team Rocket and the misunderstanding was cleared up, Yamper was excited that Eevee decided to stay with him and Chloe as she grew attached to them.

Yamper was originally given to Prof. Cerise by one of his friends who lived in the Galar region. He was then introduced to Chloe, and became very excited to meet her. However, his enthusiasm ended up scaring the then very young girl, and she ended up crying. Yamper continued to try and play with Chloe, but she eventually told him to get lost. Obeying her despite her not liking it, he decided to run away. Yamper was very happy to see that Chloe had gone looking for him afterwards, and protected her when she was cornered by a group of Venonat. Because of this, they started to sleep in the same bed and Yamper started to accept food only from Chloe.

Yamper first appeared where he saw Ash at Cerise Laboratory. Ash then attempted to befriend him, but Yamper electrocuted him instead, causing him to faint. Yamper quickly befriended Pikachu, before his trainer Chloe arrived and walked away. Yamper then reappears after Ash and Goh got back from their adventure with Lugia.[1]

When Ash and Goh returned from their adventures in the Galar region, Yamper appeared when he see Goh's Scorbunny, and starts chasing it around until he was greeted by his friend Pikachu as they play with each other while they ignored Scorbunny.[2]

Yamper was at the Cerise house, where it and Chloe were asleep in their room when the alarm clock rings. After breakfast, Yamper along with Chloe and Professor Cerise then head off to their Institute. arriving at the institute, Yamper was sad from Chloe leaving for school. Yamper along with Ash and Goh encountered a mysterious Gengar at the Cerise Laboratory and starts attacking everyone. During their search for Gengar, Yamper greets Chloe after she came home from school. However, Gengar showed up and attacked them. Chloe and Yamper then battle Gengar and defeated it, causing it to leave the institute. At night, in the Cerise house, Yamper was praised by its Trainer for saving her as they sleep together in their room.[3]

When a Pidove started living at the Cerise household due to being injured, Chloe began to take care of it out of her own time, causing Yamper to become very jealous. Yamper kept trying to get Chloe's attention, but she would keep taking care of Pidove. Eventually, when they were attacked by a Fearow, Chloe and Yamper became in-sync again after Chloe had Yamper use Spark on Fearow, driving it away. When Pidove ended up leaving, Yamper said his goodbyes.[4]

While walking, Yamper encounter a female Eevee, who left a nearby laboratory, as he notice her mimicking him and was hostile towards her. However, Yamper starts to trust Eevee then sees two people with a net as he mistaken them for bad people then runs away with Eevee. Once out of danger, Yamper discovers that he's right in front of Chloe and Goh's school as he takes Eevee on campus when he see's the two people catching up. After getting Eevee to safety, Yamper goes to get Chloe for help as he got her attention. Yamper brings Chloe to Eevee as those two quickly bonded then hides with them until his mistress reached out to Goh for help. However, while getting away, Yamper, Chloe, Eevee and Goh discover that the Pokémon at the playground were trapped in a net, including Goh's Cinderace and Sobble, by Team Rocket. Seeing this, Yamper decided to battle Team Rocket in order to rescue them but was bounced back by Team Rocket's Pelipper. However, Yamper gets help from Eevee, who witness his determination to save the other Pokémon, as they work together to send Pelipper blasting off while Ash and Pikachu rescue the captured Pokémon then blast the rest of the Team Rocket off. After realizing that the two people with a net were researchers, Yamper witness them leaving with Eevee as he becomes sad to his new friend leave and noticed that Chloe was feeling the same way. However, Yamper sadness turn to joy when Eevee decided that she wanted to stay with him and Chloe as the researchers let her be with them. Yamper was a witness when Chloe catches Eevee as he becomes excited for his mistress. Later, Yamper plays with Eevee, Pikachu and Sobble while Chloe gets a Rotom Phone from her dad.[5] 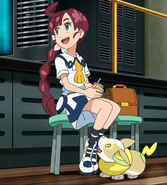