For the variant appearing in the games, see Professor Birch.

Professor Birch is a character appearing in the anime series, who is a professor.

This section, or a part of it, has been transcluded from Professor Birch; any changes involving it should be made there instead. /

Professor Birch is a tall, large man with fair skin, dark eyes, short and slightly wavy brown hair, and a squarish face with a beard. He wears a navy blue T-shirt under a white lab coat, khaki shorts with a black belt, and tan sandals on his feet. He is also sometimes seen with a brown bag, which he keeps his research papers in.

Professor Birch is an outgoing person, who enjoys conducting field research. This sometimes makes him too distracted from his other obligations, but is always willing to help people. He also bonds with Pokémon by descending on their level by playing around, as this is the way he communicates with them. Professor Birch is also a fast driver, who does not mind driving through dangerous or questionable shortcuts.

The last name Birch could possibly originate from the "birch" tree.

His Japanese surname, Odamaki, comes from オダマキ (odamaki, the Japanese name for the columbine flower).

Professor Birch was mentioned by Harrison, as a professor who loved field research and Pokémon. Birch told Harrison, on his journey, one must experience Pokémon personally. This motivated Harrison to take on the journey.[1]

After Ash reported his Pikachu was ill, Joshua contacted Professor Birch, who rode his car to Ash and Pikachu, picked them up, and drove them back to his lab. Birch suspected Pikachu must've received too much electricity, since it was affected by an electro-magnet, hence why Pikachu was trying to discharge. They arrived to the lab, where Pikachu was wired to a device to drain the excess electricity. However, there was just too much electricity for the machine and it blew up. Pikachu ran away, so Ash and Birch split each other and went off to search for Pikachu. Professor Birch, in his search, dropped his bag and fell down on a slope, startling a Poochyena. The Poochyena howled, summoning two more Poochyena, which started to chase Professor Birch. May, who was to receive her starter Pokémon, was asked by Professor Birch to send out a Pokémon and order it to attack Poochyena.

May sent a Mudkip, who accidentally used Water Gun on her. Professor Birch gained Mudkip's attention, allowing it to use Water Gun on Poochyena and scare it off. Since they did not had much time, May and Birch went off to search for Pikachu. Seeing an explosion, they found Ash, who nearly fell down a cliff, since he jumped down and hung onto a branch to save Pikachu. May and Birch pulled them both up, but Team Rocket arrived and took Pikachu. However, they accidentally drained Pikachu off its excess electricity and blasted off. Once everyone was safe, the trio went back to the lab, where it was confirmed Pikachu was healthy. May gained their attention and Birch showed her three starter Pokémon: Mudkip, Treecko and Torchic, from which May chose the latter.

To help her out, Birch gave her a Pokédex and five Poké Balls. The following day, Birch and Joshua advised Ash and May to register for the Hoenn League in the next Pokémon Center in Oldale Town. May "persuaded" Ash to come with her, so the two went off, with Birch and Joshua bidding them farewell.[2] When May saw a Mudkip up-close on Dewford Island (which were raised by Old Man Swamp), she remembered her experience with Professor Birch and his Mudkip and decided not to catch one.[3]

They came to a cave, which was actually a kid's Secret Base. The kid had Nincada attack them, so everyone fled. Regardless, Professor Birch managed to show the heroes one of the Golbat caves, before they found the kid, Keanu, who was attacked by Team Rocket, who stole his Nincada. Birch followed the children to the cave, which was dug out behind Keanu's Secret Base. There, they found members of Team Aqua and Magma talking to each other. In the end, with Team Rocket defeated and Keanu's Nincada retrieved back, Birch continued his expedition.[4]

Professor Birch had breakfast with the heroes, and was amazed by Brock's cooking, making Brock blush. Ash, Brock and May sent their Pokémon out, to show to the professor their progress. Ash's Corphish greeted Birch by pounding him, whereas Birch noted that May's Silcoon would evolve into a Beautifly someday. Brock also sent Mudkip and Lotad, the latter making Birch confused as it was oblivious to its surroundings. Birch continued the expedition, finding a group of Seedot. May attempted to give them some water, but they refused, as Birch noted they only sapped a tree from its moisture. Instead, Max polished them with its leaf, to which Birch reminded they had to understand the Pokémon to know what it liked. Birch then rolled over, and Brock told May this was how he communicated with Pokémon, even if it looked like he was playing around. When Team Rocket attempted to steal Seedot, Jessie sent a "Silcoon", to which Birch corrected her to be a Cascoon.

May sent her real Silcoon as comparison, but Jessie didn't want to trust the professor's words. In the battle Team Rocket was defeated, Silcoon evolved into a Beautifly; Birch complimented the newly-evolved Pokémon, but reminded May she had to train harder for the Contests. He gave her a frisbee for practice, which improved Beautifly's skill. Looking at Seedot, Birch reminded that they had to relocate the Pokémon. They went to another place, and Birch placed them on a tree. However, the Seedot didn't like it, so the group went to a different location. He found another place, but Team Rocket reappeared once more to fight, this time her Cascoon evolving into a Dustox. Team Rocket was nevertheless defeated, and Birch found a place for Seedot to stay. With the expedition over, Birch bid everyone farwell as he went back to Littleroot Town.[5]

Professor Birch got caught up in his field work and forgot to pick up Professor Oak at the docks. He drove away and met up with the heroes. Ash and Brock decided to accompany him and left May and Max at Birch's lab. Professor Birch drove away and noticed a Skarmory on a peak. Just then, Birch nearly crashed into a cart, in which Professor Oak was, as the cart was going to the lab. Once the group arrived at the docks, they did not see Professor Oak. Birch contacted the lab and was told Professor Oak had arrived there already, but went with May and Max after Team Rocket, who stole their Pokémon. Birch drove away with Ash and Brock to the lab, where he took Max's backpack, which Max left.

Immediately after, Birch drove away, but Ash and Brock were terrified by the bumpy path Birch drove on. After arriving to a spot, Professor Birch howled and summoned a Poochyena, whom Professor Birch befriended while conducting field work. Poochyena smelled Max's backpack and went to a spring with a cave. Birch noticed some Pokémon were outside their habitat, thinking someone must've disturbed them. Fortunately, they managed to find Oak, May and Max, who were eventually freed by the help of their Pokémon. Once Team Rocket was defeated, everyone came back to the lab, where Professor Oak, Professor Birch and Joshua bid farewell to the heroes, who went to Fortree City.[6]

The heroes met up with Professor Birch, who was playing with the children's Huntail and Gorebyss, on A Island. He admitted he came to do research on those Pokémon, to see how they evolve. May thought Birch was actually studying through playing, but Birch denied that. Nurse Joy asked him to teach the children about evolution, but Professor Birch denied, since he thought he wasn't much of a teacher. Hearing from May the villagers have Clamperl evolve on B Island into Gorebyss and C Island into Huntail, Birch decided to investigate the issue, with the heroes accompanying him. Birch went to C Island, along with the heroes and Nancy, where they were shown the cave, containing the water that evolves Clamperl into Huntail.

Keith approached them, making Birch think he was interested in Huntail evolution. With the matter settled, the group, along with Keith, went to B Island. Birch also tasted the water and noted there were minerals in it. Nancy also approached and Birch thought she was interested in Gorebyss. Once they returned to the Pokémon Center on A Island, Birch studied the water a bit. Nancy and Keith approached him and were told by Birch they and their Pokémon should know into what the Pokémon should evolve into. Birch noted the water came from the sea, but the one on C Island had Deep Sea Tooth particles and the one from B Island had Deep Sea Scale particles. Once Team Rocket were defeated for stealing the Clamperl, Birch came back on B and C Island.

There, they found a Deep Sea Scale, which was given to Nancy's Clamperl and a Deep Sea Tooth to Keith's Huntail. Though no evolution occurred, both children sent their Pokémon to Nurse Joy. Once they returned, nothing happened for a moment. Just as Birch noted these aren't evolutionary stones to evolve Pokémon in an instant, both Clamperl evolved; Keith got a Huntail and Nancy a Gorebyss. After Team Rocket were defeated a second time, Birch and Nurse Joy waved goodbye to the heroes, who continued towards Mossdeep City.[7]

Professor Birch arrived in Pallet Town with Max, to visit Ash and Professor Oak.[8] Birch brought Max as a companion, whereas May, who also had arrived, went to find Professor Birch in Pallet Town. As Ash and May had plans for participating in the Battle Frontier and Pokémon Contests, Birch advised May to capture some Pokémon not native to Hoenn. When Team Rocket came to steal the Pokémon, Birch went to assist the heroes, but Ash's mom stopped him, putting the trust in the children. Much to Birch's surprise, he saw that she was right, for they managed to defeat Team Rocket without their help. As the group was to part ways, Birch recited a piece of poetry before being corrected by Professor Oak.[9]

When the heroes were trying to Elekid, Brock reminded Ash about his arrival to Hoenn with Pikachu and Prof. Birch - they believed that Elekid, too, suffered from excess electricity.[10]

Sawyer remembered Professor Birch, from whom Sawyer obtained Treecko as his starter Pokémon.[11] 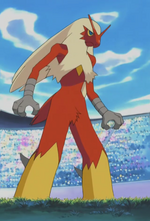 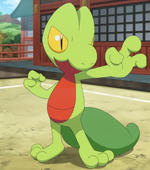 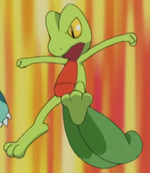 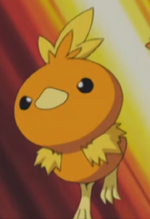