Professor Birch is the Pokémon Professor of Hoenn. He is Brendan or May's father. He lives in Littleroot Town. In the anime, he is not explicitly related to May and entrusts Ash as May's bodyguard on her journey.

Professor Birch is a tall, large man with fair skin, dark eyes, short and slightly wavy brown hair, and a squarish face with a beard. He wears a navy blue T-shirt under a white lab coat, khaki shorts with a black belt, and tan sandals on his feet. He is also sometimes seen with a brown bag, which he keeps his research papers in.

Professor Birch is a very outgoing and friendly person. Although he's fat, he's very active and often researches outside, as he doesn't like being in cramped spaces. Additionally, he is also kind and generous and doesn't hesitate to help others, like every professor in the Pokémon games. However, despite his positive traits, Professor Birch is also a goofy, cowardly man that often gets into severe trouble. He commonly needs rescuing from others due to being jumped and chased by wild Pokémon so often; in Omega Ruby and Alpha Sapphire, he even gets chased by his wife.

The last name Birch could possibly originate from the "birch" tree.

His Japanese surname, Odamaki, comes from オダマキ (odamaki, the Japanese name for the columbine flower).

In Ruby and Sapphire, he is chased by a Poochyena and the player character has to choose either a Treecko, Torchic, or Mudkip and defeat the Poochyena, and he will allow them to keep the Pokémon.

In Emerald, Prof. Birch is chased instead by a Zigzagoon. After completing the Hoenn Pokédex, Prof. Birch will give the player character a Chikorita, Cyndaquil, or a Totodile.

In Omega Ruby and Alpha Sapphire, he is chased by a Poochyena and the player character has to choose either a Treecko, Torchic or Mudkip and defeat the Poochyena, and he will allow them to keep the Pokémon. After getting into the Hall of Fame, he is chased by a Shroomish and one has to choose either a Chikorita, Cyndaquil or a Totodile. (Interestingly, though, he says that the Shroomish isn't a threat to him, but lets the player character keep the Pokémon anyway.)

After completing the Delta Episode, he is chased by a Machoke holding some boxes and the player has to choose either a Snivy, Tepig or an Oshawott. (Interestingly though, he mistakes the Machoke as a wild one, but lets them keep the Pokémon anyway.)

After getting into the Hall of Fame twice, he is chased by his wife and the player can choose from a Turtwig, Chimchar or a Piplup. (Interestingly, though, he mistakes his wife for a wild Pokémon, but lets them keep the Pokémon anyway.) 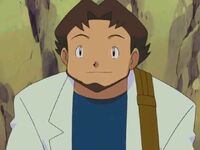 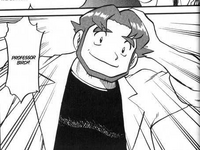