Primarina (アシレーヌ, Ashireenu) is a Water/Fairy-type Pokémon introduced in Sun and Moon. It is the second and final evolved form of Popplio.

Primarina is a white siren-like Pokémon. Its light blue tiara is adorned with two pink starfish barrettes connected to three white pearls. It has long flowing blueish hair tied with white pearls resembling hair bands. Whenever it performs Sparkling Aria or Oceanic Operetta, its hair becomes undone. It has a round pink nose and serene blue eyes with white eyelashes. On its chest, there is a light blue fin wrapped around it. It also has a long, somewhat plump blue tail embellished with pink spikes, light blue fins, and a white tail fin at the very end.

Trainers who raise Popplio watch their tireless practice and dedication finally pay off when they evolve into Primarina. Primarina, as the Pokédex says, sees every battle as a stage, prompting people to call it a songstress. Unfortunately, it might suffer from sore throats, especially when its voice isn't maintained well. Dry weather, consecutive battles, and throat damage all imperil their vocal abilities. Those that do manage this task, however, are able to battle alongside some of the most renowned performers in the world.

In battle, Primarina use the vibrations created by their voices to maneuver sparkling bubbles around the field. Only some of these bubbles are explosive; they can leap around on the non-volatile ones to further play with opponents. The sight of a field of Primarina bubbles glittering in the moonlight is said to be breathtaking. Primarina teach one another new songs in their colonies, passing them down over the generations. They lead beautiful seaside concerts on moonlit nights. Consequently, each colony has its own unique repertoire.

Primarina can skillfully create and manipulate water bubbles and balloons while dancing gracefully. It can also sing and understand variations of songs and operettas, which can in turn control the movements of water balloons. Its singing seems to cast a soothing effect on Pokémon that hear it.

Brionne evolves into Primarina at level 34. It is also the final evolution of Popplio.

Primarina first appeared in Pushing the Fiery Envelope! under the ownership of an unnamed trainer. Ida also owns a Primarina that evolved from her Brionne offscreen in Evolving Research!.

Lana's Primarina debuted in The One That Didn't Get Away! after she evolved from her Brionne.

Primarina is based on sea lions, mermaids, sirens, and selkies (water maidens in European mythology that took on the form of seals). Elements of performers and opera singers are also mixed in.

Its Japanese name, Ashirēnu, comes from 足利 (ashika, sea lion), siren, and rain. It may also incorporate Irene, the Greek goddess of peace. 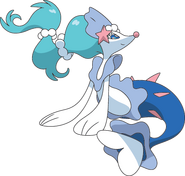 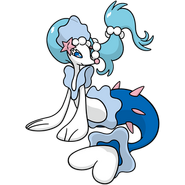 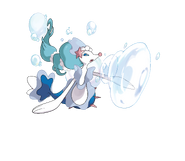 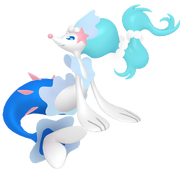 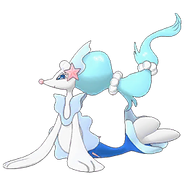 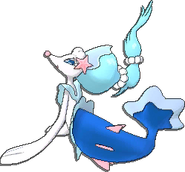 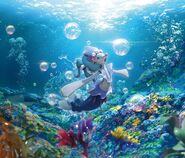 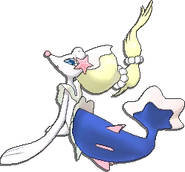 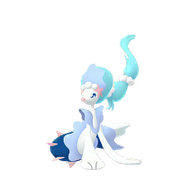