Porter in other languages

Porter is a supporting character to the Decolora Adventures arc in the Best Wishes series. He appears to be the captain of the ship that Ash and Co. take toward Kanto via the Decolore Islands.

Porter first appeared when he was shown to take the tickets of passengers boarding the cruiseship departing the Nuvema Town harbor. Ash, Iris and Cilan gave their tickets to Porter, but he wasn't able to let them on board, as they didn't have the proper tickets. After Ash and his friends got the real tickets that were stolen by Team Rocket, he welcomed them aboard, and told them that he would accompany them on their travels through the Decolore Archipelago. He appeared again in the following episode as Ash and co. disembarked at Honey Island.

In Cilan and the Case of the Purrloin Witness!, Porter encountered Ash and friends yet again. The three were surprised to see Porter on a different cruiseship, albeit in a different uniform. Porter revealed that, like Nurse Joy, Officer Jenny, and Don George, he is part of a family of identical members, the Porter they encountered earlier being his first cousin. 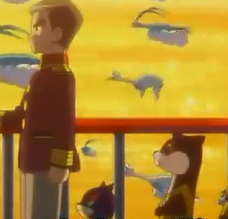