Popplio (アシマリ, Ashimari) is a Water-type Pokémon. It is one of the three Starter Pokémon of the Alola region, the other two being Litten and Rowlet.

Popplio is a somewhat chubby blue sea lion Pokémon. It has large eyes and a long white snout with a pink round nose and black whiskers. It has two teardrop-shaped ears on each side of its head. Around its neck is a light blue clown collar which extends out past its shoulders. It has four flippers which consist of two large ones with white markings isolating its toes and two small rear ones.

Popplio will frequently work on blowing bubbles and try to get them larger than their bodies. Instead of walking, Popplio will generate and use their bubbles as a springboard, popping as they leap on top of them in order to get a bounce out of them as they pop, in turn allowing them to perform acrobatic stunts in their leaps to please those they enjoy playing with.

Popplio evolves into Brionne at level 17 and then Primarina at level 34.

Popplio first appeared in Alola to New Adventure! under the ownership of Lana. She later evolved into Brionne in Evolving Research! and into Primarina in The One that Didn't Get Away!.

Popplio is a combination of the classical depictions of a performing sea lion and a circus clown, with the light-blue collar around its neck, white muzzle, and pink clown-like nose contributing to its circus clown design and it's acrobatics skills such as balancing balls with their noses. It could also be based on the Hawaiian monk seal due to Alola being based on Hawaii or the Hooded seal and its inflatable nasal cavity due to Popplio being able to create bubbles with its nose. Theme-wise, Popplio may also be based on the chemical element mercury, which in alchemy was one of the three primes, as mercury and water are both liquids. When standing on its tail and extending its fins, Popplio resembles the symbol used for both the planet Mercury and, in alchemy, the element mercury (☿).

Popplio comes from pop (as in popping bubbles) or pōpō (Hawaiian for ball) and ilio-holo-i-ka-uaua (a species of Hawaiian monk seal) or leo (Greek for "lion", possibly referencing the sea lion). 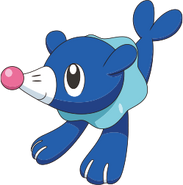 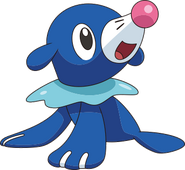 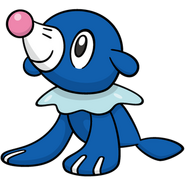 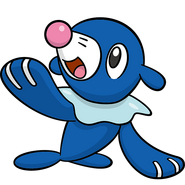 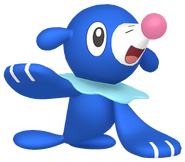 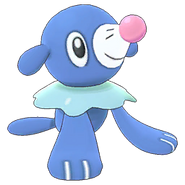 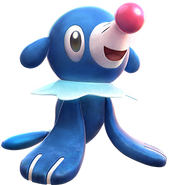 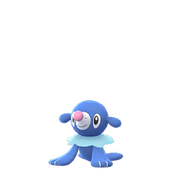