Pokémon the Series: Black & White, known as Pocket Monsters: Best Wishes! (ポケットモンスター ベストウイッシュ！ and 포켓몬스터 베스트 위시 Poketto Monsutaa Besuto Uisshu and Poketseuteo Beseuteu Wisi) in Japan and South Korea respectively, is the Generation V series of Pokémon the Series. It aired from September 23, 2010, to March 27, 2014, in Japan, from May 16, 2011, to March 28, 2014, in South Korea, and from February 12, 2011, to December 7, 2013, in the United States. The series covers the main protagonist, Ash Ketchum, and his Pikachu adventures in the new region of Unova. As always, the past female companion of Ash, Dawn, has left the series and is replaced by a girl named Iris, who has an Axew. Ash also has a male friend in this series named Cilan, who is also a Gym Leader. Team Rocket is still in the series, and new antagonists appear in the form of the crime syndicate Team Plasma. Team Plasma is after the Legendary Duo Reshiram and Zekrom, similar to how other villainous teams went after the Legendary Pokémon in their respective regions. Ash also has a new set of clothing based on Pokémon Black and White's male player character's design.

Every non-Asian localization of this series titles their dub seasons under the term "Black & White", or any translation of it, similar to the fifth generation of games. Ash Ketchum starts off his journey leaving behind the Pokémon he caught in the Sinnoh region at Professor Oak's Lab. This time, Ash is going to compete in the Unova League by gaining the eight badges while capturing and befriending new Pokémon.

In the original Japanese version, this generation is split into four story arcs:

In South Korea, the series is split into six airing periods, along the lines of the seasons in Japan. They are: 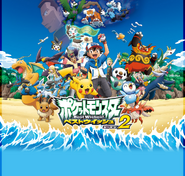 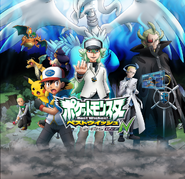 Logo of Pokémon: BW Adventures in Unova and Beyond (season 16)