The first time the player ventures into the Pokémon Tower, he or she usually does not have the Silph Scope. Without the Silph Scope, the player encounters unidentifiable ghosts that cannot be fought. When the player has received the Silph Scope, the ghosts are revealed to be a Gastly, Haunter, or Cubone in most encounters. At the top of the tower, there is a staircase leading to where Mr. Fuji is being held captive by Team Rocket, however, the restless ghost of a dead mother Marowak attacks the player.

The Pokémon Tower completely changed in Generation II. It became the Kanto Radio Tower. The new radio tower was just like Goldenrod's, but there is a guard that keeps the player from going upstairs. The graves located in the Pokémon Tower were relocated into a small house called Soul House. The Soul House is located at south end of Lavender Town. In generation IV, the Soul House's name was changed to "House of Memories".

Pokémon Tower in Generation I 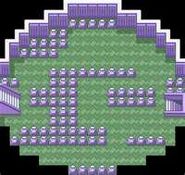 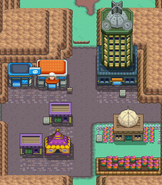 The Radio Tower
Community content is available under CC-BY-SA unless otherwise noted.
Advertisement