The characters Mustard, Klara, and Avery were introduced.

Additionally, this expansion will allow the player to train certain Pokémon traveling with them to be able to Gigantamax, such as their Starter Pokémon.

All Legendary Pokémon from the previous Pokémon main series games that cannot be found via other methods can be encountered as Dynamax Pokémon and caught while the player is exploring underneath Pokémon Dens.

Some Legendary Pokémon are exclusive to a game version. 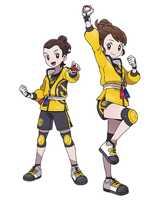 Victor and Gloria in the Isle of Armor outfit. 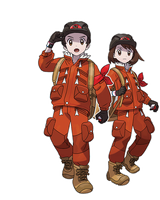 Victor and Gloria in the Crown Tundra outfit.
Add a photo to this gallery
Retrieved from "https://pokemon.fandom.com/wiki/Pokémon_Sword_and_Shield_Expansion_Pass?oldid=1326423"
Community content is available under CC-BY-SA unless otherwise noted.