The adventure starts in the Alola region, filled with beaches, tropical trees and water. There are many new features added in game, such as Z-Moves, Z-Crystals, Alolan forms of Pokémon of previous generations, The Rite of the Island Challenge, Hyper Training, and Poké Ride!

Ultra Beasts are certain group of Pokémon that come from an alternate universe, the Ultra Space.

Alolan forms are a brand new addition to the series. Alolan forms are Pokémon from previous generations that went through several changes due to the climate of Alola. These changes include the Pokémon's type, design, height, and weight. All of them are from Generation I. 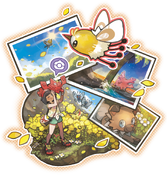