Pokémon Wiki
Register
Don't have an account?
Sign In
Advertisement
in: Pokémon Games, Side Games, Nintendo 64 Games, Generation I
English

Pokémon Snap (ポケモンスナップ, Pokémon Sunappu) is a video game developed by HAL Laboratory with Pax Softnica and published by Nintendo for the Nintendo 64. It is part of the Pokémon series, and was first released in North America on June 30, 1999.

It was released in Japan on the Wii's Virtual Console on December 4, 2007, in North America on December 10, 2007, then in Europe and Australia on the next day, three days earlier than previously planned. The Virtual Console version features the ability to send pictures taken in the game to the Wii Message Board and send them to friends. This is the first Pokémon game to get a Virtual Console release, and the first Virtual Console title which has been modified to take advantage of features of the Wii console. The default name of the main character, Todd, was changed to Todd Snap for unknown reasons, likely because of retcon, as he was called Snap in the home video versions of the Pokémon anime. It is currently available for 1,000 Wii points.

Pokémon Snap was originally revealed as a Nintendo 64DD game. The game features 63 of the Red and Blue original generation of 151 Pokémon.

Todd Snap, a fledgling Pokémon photographer, is summoned by Professor Oak to an unusual island to help him with a report. Oak needs quality pictures to accompany his scientific findings, and knows from past experience that Todd is the right person for the job. Pokémon Island, which contains a variety of climatic and geographic regions, is a place where Pokémon live relatively undisturbed by humans. Using a motorized, amphibious buggy named the Zero-One, Todd explores the island and takes photographs of the wide variety of Pokémon that inhabit its environments.

From Professor Oak's research hub, the player can select between the game's levels and features using a menu system. The path through the levels is linear, similar to a rail shooter. Up to 60 pictures can be taken per visit to a course. After completing a course, the player selects their best picture of each Pokémon to be rated by Professor Oak and added to the Pokémon Report. Scoring takes into account various aspects of the pictures, such as the Pokémon's size, its pose, and Todd's technique (keeping the Pokémon centered in the frame). Extra points are awarded for capturing a "Special" pose or Pokémon, and if there are multiples of the same Pokémon within the frame. Scoring well in the Pokémon Report and photographing a wide variety of Pokémon is required to make progress in the game.

The game features seven levels: Beach, Tunnel, Volcano, River, Cave, Valley, and the special course "Rainbow Cloud". However, the staggered acquisition of items from Professor Oak ensures that the player must re-explore the courses to discover new material. Levels must be replayed in order to locate hidden Pokémon, alternate routes, or photographic opportunities that yield the best scores. Each of the first six levels also contains the hidden likeness of a certain Pokémon in the environment, called a "Pokémon Sign." When the player photographs all the signs and presents them to Professor Oak, the seventh level is unlocked.

Because of the limited mobility of the Zero-One, Professor Oak will aid you in capturing better pictures by providing a variety of items:

The game also features an "Album mark" where players can mark their favorite pictures to view at a later date or show to friends. In the Virtual Console version for the Wii, players have the ability to send photos to the Wii message board, other people with Wii consoles, or the photo channel. Also using WiiConect24 you may send pictures on the Wii Message Board to other registered Wii Consoles.

Upon the game's release, Nintendo launched a marketing campaign in which owners of Pokémon Snap could bring a memory card with game data on it to a retail store and print a sheet of 16 stickers featuring the photos they'd taken; Nintendo partnered with Blockbuster in North America, Lawson in Japan, and Toys "R" Us and Myer in Australia for the promotion. Stores in these franchises carried "Pokémon Stations" which could print the stickers for a fee of $3. In North America, the promotion ran through the US Thanksgiving of 1999 in more than 4,500 Blockbuster stores.

Warner Bros. Movie World also had a briefly running ride based on the game to promote its Australian release.

Pokémon Snap received generally positive reviews from the media, although Matt Casamassina of IGN noted that "Pokemaniacs are bound to be disappointed with the selection of Pocket Monsters in the game -- roughly 62 out of a possible 151 in all." The following is a collection of screenshots featuring the game Pokémon Snap.

Prof. Oak giving you the run-down.

Zoom in and take a shot of Pidgey at the beginning of the Beach course.

A shot of Meowth trying to annoy a Pidgey.

Approaching the gate to go back to the lab.

At the end of each level, it will calculate the number of pictures taken.

An amazing hover car... that will never be able to clear slight objects.

Selecting an area on the island.

Picking the shots you want to show to Oak. 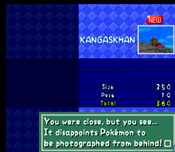 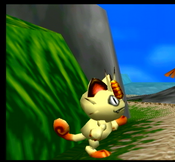 A picture of a Meowth in pursuit.

Snapshot in the wii menu.

Send to a friend?

A hard to create situation.

Dittos, the more in the shot the better.

Trying to save a Pikachu with an apple.

Finally! Being able to speed up is a great boon in this game.

Can you find a Mewtwo?

My what a jolly dance.

On a stump! On a stump you say! Amazing!

A rare Pokémon performing an attack, a good shot.

Maybe hitting it with apples will help?

...If they're hidden, how did he find out about them?

Oak spends a wee bit too much time around Pokémon...

Here's looking at you, kid.

Mew dancing the night away.