Pokémon Rumble U is a Nintendo eShop title for the Wii U. It was announced in March 2013's issue of CoroCoro. The game uses NFC figures of Pokémon which interact with the game. 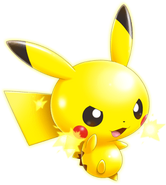