Pokémon Ruby and Sapphire (ポケットモンスター ルビー・サファイア Pocket Monsters Ruby and Sapphire) are the first two games introduced for Generation III series. This set of games takes place in the Hoenn region and features new Pokémon in comparison to the previous versions.

Pokémon Ruby and Sapphire featured a number of upgrades and differences from the previous games.

As is tradition, the player can choose one of three different Starter Pokémon at the start of the game. The player will need to choose either Torchic, Mudkip, or Treecko of his/her choice to save Professor Birch, who was being attacked by a Poochyena. Also, in tradition, the three Pokémon are Fire, Water or Grass types, respectively.

As in every other main series Pokémon game, there are a set of Legendary Pokémon which were first featured in Ruby and Sapphire.

Ruby and Sapphire received mostly positive reviews, though critics were divided in their assessment of the games, especially on the gameplay and graphics. Most of the complaints focused on the fact that the gameplay had not changed much since previous generations. With the popularity of Pokémon on the decline and the rising popularity of Yu-Gi-Oh! at the time, the games sold less than previous generations. However, they were still commercial successes; with around 16 million copies sold according to IGN, they are the best-selling games for the Game Boy Advance. 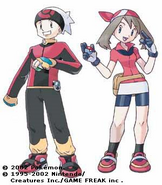 Pokémon Ruby and Sapphire Boy (Brendan) and Girl (May)
Add a photo to this gallery
Retrieved from "https://pokemon.fandom.com/wiki/Pok%C3%A9mon_Ruby_and_Sapphire_Version?oldid=568172"
Community content is available under CC-BY-SA unless otherwise noted.