Season in other countries

Pokémon Origins, also known as Pocket Monsters: The Origin (ポケットモンスター THE ORIGIN; Poketto Monsutaa: THE ORIGIN; Pocket Monsters: THE ORIGIN) in Japan, is an animated series that tell the adventures of Red's journey from his first Pokémon to winning the Pokémon League and him setting off to find the Mythical Pokémon, Mew. It was announced during the Pokémon Game Show on August 18, 2013 in Japan. It is an anime special to coincide with X & Y on October 2nd, very pilot and in United States on November 15th on Pokémon TV App, part 2 released on 18th, part 3 on 20 and finally part 4 on 22nd November. This four-episode series is a special animated retelling of the story of Pokémon Red and Blue. This features Red, Blue, Professor Oak, Brock, Mr Fuji and Lance. Though the series mainly follows the plot of Generation I, several elements from other generations (such as Mega Evolution) appear as well.

Differences between the Anime and Games (Red, Blue, Green, Yellow, FireRed and LeafGreen)

In other languages and countries 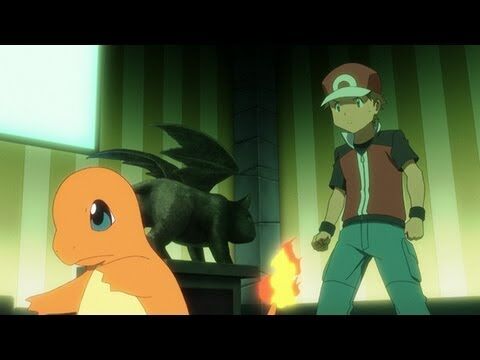 The Japanese Logo of Origins.

Professor Oak as he appears in Origins

Red as he appears in Origins

Blue as he appears in the Anime.